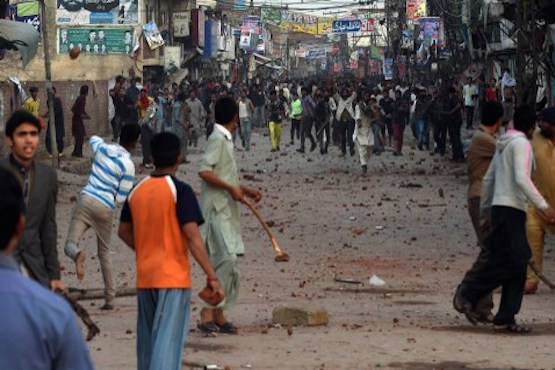 Pakistani Muslim and Christian demonstrators clash during a protest in Lahore in this March 16, 2015 file photo. Thousands of Christians rioted in the Pakistani city of Lahore, smashing property and vehicles as they clashed with police in a second day of protest against twin Taliban suicide bombings of churches that killed 17 people. (Photo by Arif Ali/AFP)

A Pakistani prosecutor who tried to push Christians into converting to Islam in exchange for an acquittal in a lynching trial has been removed from the case, activists said.

Pakistani media reported that Deputy District Public Prosecutor Syed Anees Shah told 42 Christian prisoners before an anti-terrorism court in Lahore that he could "guarantee their acquittal" if they converted to Islam.

Contacted by a British newspaper, Shah first denied the allegation then admitted that he had offered them a choice.

The Christians involved in the case are all from Youhanabad, Lahore. They were arrested in connection with the lynching of two suspected Muslim terrorists shortly after the Taliban attacked two churches on 15 March 2015, AsiaNews reported. The bombings killed 15 people.

Aftab Gill, information secretary of the Christian, Masiha Millat Party, later said the prosecutor was removed from the case by the Punjab law office.

"We welcome the Punjab government's decision to remove Shah after his controversial offer," he said. "We are planning to file a formal application for his dismissal from his job," he added.

"It is really bad to lead people astray," said Rev. Arshad Ashknaz of Christ Church, from one of the churches attacked in Youhanabad, speaking to AsiaNews. "This," he added, "will give a bad image to the court and the whole legal fraternity.

In his view, "The public prosecutor can be sued for this prejudiced action. We plan to meet him soon. The government should reject this. Fear of death can force anyone to change religion."