Witnesses tell tribunal about torture, murder, rape and forced abortion in the camps of Xinjiang Bangladeshi social activists of the Open Dialogue movement perform street art in front of the National Press Club in Dhaka on June 4 protesting against the violence against Uyghur Muslims in China. (Photo: AFP)

Brutal torture, killings, rape and forced abortion are among the horrific crimes against Uyghur Muslims committed by police in prisons and detention camps in Xinjiang province of northwest China, Uyghur exiles told a tribunal.

The Uyghur Tribunal in London gathered evidence to determine whether China’s brutal crackdown on Uyghur Muslims in the restive Xinjiang Uyghur Autonomous Region amounted to genocide or crimes against humanity.

The independent tribunal from June 4-7 was arranged by London-based businessman Nick Vetch, who was involved with similar hearings that scrutinized allegations of forced organ harvesting of Falun Gong cult members and Uyghurs in China in 2019.

Some 24 Uyghur exiles traveled from various parts of Europe and America to testify before the tribunal. Out of some 300 witness statements, 40 witnesses were chosen and 24 testified during the session. The tribunal also approached 50 experts and 14 testified, reported Bitter Winter, a magazine on religious liberty and human rights.

Witnesses said prison inmates faced brutal abuses in torture rooms that contained so-called “tiger chairs” where they were tied and beaten, and “water rooms” where the shackled inmates were forced to stand in neck-deep freezing water for hours.

One witness recalled how prison guards forced a young girl to confess to baseless crimes following a brutal gang rape in front of some 100 prisoners. Others recounted how camp guards picked up young girls at night for rape who returned “beaten, bloody and broken.”

Qelbinur Sedik, a former teacher in a detention camp, presented written orders from the authorities to carry out forced sterilizations and forced abortions. She also noted that inmates were sorted for killing by lethal injections and organ harvesting.

“I am free but part of me is still in the camps with those young men and women who are still there undergoing the most awful torture,” Bitter Winter quoted her as saying.

Omar Bekali, a witness and camp survivor, demonstrated how he and other inmates were inhumanely chained and herded like animals. 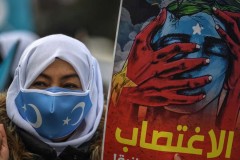 “There simply is no freedom for the people living in Xinjiang to talk about what is happening there. China makes it impossible. And the country has so far refused demands for an independent UN investigation into alleged human rights abuses in the region. But evidence exists, even if it must be presented thousands of miles away from China itself,” Cheshire wrote.

Observers and rights groups say up to one million Uyghurs and other Muslims are detained in prisons and detention camps in Xinjiang without trial where they face serious human rights violations.

However, the International Criminal Court (ICC) has refused to prosecute China for crimes against humanity against Uyghurs as China is not a signatory and member of the ICC.

The crackdown on Turkic-origin Uyghurs has sparked widespread condemnation, but China has denied all allegations of torture and abuses while defending lawful actions against an insurgency in Xinjiang.

In a report on June 10, London-based Amnesty International once against slammed China’s draconian repression of Muslims in Xinjiang as “crimes against humanity.”

“The Chinese authorities have created a dystopian hellscape on a staggering scale in the Xinjiang Uyghur Autonomous Region,” said secretary-general Agnès Callamard.

“Uyghurs, Kazakhs and other Muslim minorities face crimes against humanity and other serious human rights violations that threaten to erase their religious and cultural identities.”

Last year Pope Francis called Uyghur Muslims “persecuted people” in his wide-ranging book Let Us Dream: The Path to A Better Future, where he said, “I think often of persecuted peoples: the Rohingya, the poor Uyghurs, the Yazidi,” in a section about the persecution of Christians in Muslim countries.