A time may come when the CCP is no longer ruling China and Falun Gong is again a popular, permitted public activity 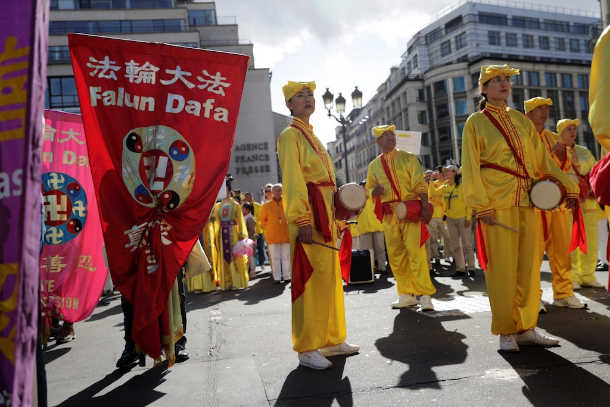 People demonstrate in Paris in September 2017 to support the practice of Falun Gong in China, where the atheist communist authorities are wary of any organised movements outside their control. Human rights groups report that large numbers of Falun Gong practitioners have been beaten and killed in labor camps and other detention facilities. (Photo by Thomas Samson/AFP)

Twenty years ago this week, on July 20, 1999, the Chinese Communist Party (CCP) banned the Falun Gong meditation and spiritual practice, unleashing a vicious campaign of persecution against tens of millions of innocent Chinese. Falun Gong practitioners across China have since been subjected to widespread surveillance, arbitrary detention, horrific torture and extrajudicial killings, abuses which continue today.

Given the force of the CCP’s crackdown, few observers would have expected Falun Gong to survive. But a 2017 study by Freedom House concluded that 7-20 million people in China continue to practice Falun Gong, including many who took up the discipline after the repression began. Moreover, Falun Gong believers in China have responded to CCP persecution with tenacity, nonviolence and creativity. This represents a striking failure for the party.

Many factors have contributed to this outcome, including individual believers’ firm faith, internal CCP infighting and occasional international pressure on the group’s behalf. But there are three aspects of Falun Gong practitioners’ pushback in China that have been especially impactful and are worth considering for emulation by other victims of religious persecution in China and beyond.

Reaching out to potential persecutors

Falun Gong practitioners inside and outside China, along with their lawyers and family members, have made a concerted effort to directly communicate with security agents and judges by phone and in person. They urge police not to arrest local Falun Gong residents, make personal appeals to officers’ individual conscience to resist abusive directives, challenge key aspects of CCP propaganda used to vilify Falun Gong, and argue that the campaign is illegal and the defendant innocent.

When a Falun Gong practitioner is detained, adherents inside and outside China apply pressure on local officials to secure the detainee’s release. Teams of volunteers in numerous countries outside China make phone calls to local police, public security agents, prosecutors, and judges, using numbers obtained from inside China (sometimes from sympathetic police). According to the coordinator of one such team, over 3,000 calls might be made on behalf of 350 detained individuals in a given week. Within China, adherents write letters to local authorities, hire human rights lawyers to represent the detained believer, and increasingly collect signatures among non-practitioners on petitions calling for the individual’s release.

Gradually, these efforts appear to be bearing fruit. There are well-documented cases of detainees who were released after focused rescue campaigns. More broadly, one interviewee who has made thousands of calls to officials reflected that “in places all over China, [police] are clearer about the true situation; there are many cases of police secretly helping Falun Gong.” A lawyer who has represented Falun Gong clients made a similar observation that “because Falun Gong practitioners have talked to local officials, some of them have changed their attitude and realize that Falun Gong members are not that threatening, so they won’t arrest them.”

These dynamics have been amplified by the 2015-16 purge and imprisonment on corruption charges of former security czar Zhou Yongkang and other officials associated with the anti-Falun Gong campaign, which has reduced some of the top-down pressure on local officials to target Falun Gong.

Facing the world’s most sophisticated censorship and surveillance system, Falun Gong practitioners have proven particularly adept at not only developing new workarounds to preserve access to information, free speech and data privacy but also at disseminating them at the grassroots level.

Highly educated technologists who practice Falun Gong in the United States have developed tools enabling users in China and elsewhere to access blocked websites. But the tools themselves — and regular software updates — are also shared throughout China via various channels with a large and diverse population of Falun Gong believers and other Chinese. Young practitioners in a particular locale might help elderly or less technologically savvy believers learn how to download and use the software. Others will share it with acquaintances via homemade CDs and USB drives.

Once able to jump the so-called Great Firewall, many Falun Gong practitioners in China visit Minghui, a Chinese-language, overseas-based website that serves as a clearing house and communications hub for Falun Gong worldwide. One section of the website is something of an activist resource toolkit, replete with the latest versions of circumvention tools, satellite dish settings and instructions for making automated phone calls.

Minghui and other communications networks have also shared tips and solutions to emerging technological threats that might otherwise be known only by experts. Insiders in the tech industry have relayed first-hand accounts of how police monitor cellphone usage of Falun Gong practitioners. Notices have gone out noting that Apple iCloud data is now being stored on servers in China following adoption of the 2017 Cybersecurity Law and therefore, adherents should take precautions not to store sensitive — or even any — information there.

After a Beijing adherent was tracked down by authorities via geolocation technology when making phone calls, activists in the city began urging practitioners to move from place to place if speaking about Falun Gong or sending automated recordings.

Much content disseminated by Falun Gong practitioners in China continues to focus on the community’s own plight — debunking fabricated propaganda claims, exposing human rights violations or explaining the illegal basis of the campaign.

However, about five years into the ongoing persecution, adherents began expanding the repertoire to a much wider array of content. This has included writings and talking points placing Falun Gong’s situation in the broader historical perspective of CCP political campaigns, explaining the campaign’s impact on social morality, or demonstrating its impact on more widely acknowledged problems in China like corruption, police brutality and tainted goods.

In making this shift, Falun Gong activists have managed to engage a broader segment of the Chinese population who might otherwise feel like the group’s suffering has nothing to do with their own lives.

The most notable example of this phenomenon has been the Tuidang movement. Since 2004, Falun Gong practitioners and supporters have encouraged “citizens to issue tuidang (withdraw from the party) statements, symbolically severing their affiliations with the party, youth league or young pioneers as a form of catharsis and a way to clear the conscience,” as a 2015 study noted.

Focused as it is on the realms of spirit and culture, the Tuidang movement does not aim to overthrow the Communist Party but rather encourages Chinese to imagine a future without it and to renounce support for its violent tendencies. The campaign has spread by word of mouth, homemade brochures of a commentary series questioning the CCP’s legitimacy, messages written on paper currency, and via social media and overseas websites, resulting in many renunciations, mostly by non-practitioners.

Looking to the future

In today’s China, Falun Gong remains a taboo subject. Many Chinese still believe party propaganda that leads them to fear or even hate Falun Gong practitioners. On a daily basis, large numbers of judges, prosecutors and police play an active role in the arrest, imprisonment and torture of Chinese citizens who persist in their devotion to Falun Gong. Nevertheless, in July 1999, few people inside or outside China would have suspected that, 20 years later, millions might still be practicing Falun Gong, neighbors would be signing pro–Falun Gong petitions, and some police would be refusing to arrest adherents.

The simple fact that Falun Gong has survived the CCP’s onslaught is impressive and amounts to a genuine failure of the party’s repressive apparatus. It is hard not to conclude that in banning Falun Gong CCP leaders created a self-fulfilling prophecy, generating the very threats they feared by turning tens of millions of apolitical citizens and even party cadres into a mass of dedicated activists at odds with the CCP.

Looking ahead, as the CCP’s violent anti-Falun Gong campaign continues and the technological capacity of the party-state rises, it is hard to imagine Xi Jinping reversing the verdict on Falun Gong. But it is just as hard to imagine the CCP succeeding in its long-running project to eradicate the discipline. Rather, as Falun Gong practitioners continue to win small victories day in and day out throughout China, a time may come when the CCP is no longer ruling China and Falun Gong is again a popular, permitted public activity.

It may take another 20 years, but Falun Gong practitioners have proven their remarkable resilience and ability to play the long game.

Sarah Cook is a senior research analyst for East Asia at Freedom House, director of its China Media Bulletin and author of ‘The Battle for China’s Spirit: Religious Revival, Repression and Resistance under Xi Jinping’. The views and opinions expressed in this article are those of the author and do not necessarily reflect the official editorial position of ucanews.com.