Now that so many of their own clergy are speaking out, the world will be looking to spiritual leaders for their response
Published: August 10, 2020 03:41 AM GMT ▾ On Aug. 8, some 76 faith leaders from around the world issued a powerful statement calling for action to stop atrocities against the Uyghurs and other Muslims in China that they describe as “one of the most egregious human tragedies since the Holocaust.”

Myanmar’s Cardinal Charles Maung Bo, president of the Federation of Asian Bishops’ Conferences, and Indonesia’s Cardinal Ignatius Suharyo were among the senior figures calling for an investigation into grave human rights violations against the Uyghurs.

While the Uyghurs have faced repression for many years, a campaign of persecution has intensified in the past few years, with evidence to suggest that the Chinese Communist Party regime is aiming to eradicate the Uyghur cultural and religious identity.

At least a million — perhaps as many as three million — Uyghurs are incarcerated in prison camps, where they face systematic and severe torture, sexual violence and slave labor. Outside the camps, the Chinese regime has established an Orwellian surveillance state, with artificial intelligence, facial recognition technology, cameras on every block and Chinese agents living with Uyghur families to monitor them 24 hours a day.

In recent months, further evidence has emerged of the transfer of Uyghurs across China for slave labor and forced sterilization of Uyghur women. As the faith leaders note in their statement, “recent research reveals a campaign of forced sterilization and birth prevention targeting at least 80 percent of Uyghur women of child-bearing age in the four Uyghur-populated prefectures — an action which, according to the 1948 Genocide Convention, could elevate this to the level of genocide.”

Religious practice has been a particular target, with the destruction of mosques and Muslim burial grounds. Men with beards of a certain length or women wearing headscarves can end up in a prison camp. Religious acts such as fasting during Ramadan, or praying, are punished and there have been reports of Uyghurs being forced to eat pork and drink alcohol.

China’s state media has declared that the aim in this crackdown on the Uyghurs is to “break their lineage, break their roots, break their connections and break their origins.” As TheWashington Post put it in an editorial: “It’s hard to read that as anything other than a declaration of genocidal intent.” Leaked high-level Chinese government documents last year speak of “absolutely no mercy.”

The 76 faith leaders’ statement is not the first time that religious leaders have spoken out, but it is the first time so many have done so with such unity, urgency and in such numbers across faith communities.

“We have seen many persecutions and mass atrocities. These need our attention. But there is one that, if allowed to continue with impunity, calls into question most seriously the willingness of the international community to defend universal human rights for everyone — the plight of the Uyghurs,” they write.

“After the Holocaust, the world said, ‘Never again.’  Today, we repeat those words ‘Never again’ all over again. We make a simple call for justice, to investigate these crimes, hold those responsible to account and establish a path towards the restoration of human dignity.”

Comparisons with the Holocaust

The statement follows a letter last month from the president of the Board of Deputies of British Jews, Marie van der Zyl, to the Chinese ambassador in London, Liu Xiaoming, and a message from former chief rabbi Lord Sacks, both of whom took the rare step of making comparisons between the Holocaust and crimes committed against the Uyghurs.

According to van der Zyl, nobody could see the evidence and fail to note what she describes as “similarities between what is alleged to be happening in the People’s Republic of China today and what happened in Nazi Germany 75 years ago: People being forcibly loaded on to trains; beards of religious men being trimmed; women being sterilized; and the grim specter of concentration camps.”

Rabbi Lord Sacks wrote a Twitter thread saying: “As a Jew, knowing our history, the sight of people being shaven-headed, lined up, boarded onto trains and sent to concentration camps is particularly harrowing. That people in the 21st century are being murdered, terrorized, victimized, intimidated and robbed of their liberties because of the way they worship God is a moral outrage, a political scandal and a desecration of faith itself.”

Maajid Nawaz, a prominent Muslim counter-extremism activist in the UK, went on hunger strike last month to mobilize support for a petition to secure a debate in the British parliament on the Uyghur crisis and a call for the imposition of targeted Magnitsky sanctions on the perpetrators of atrocities.

Genocide, he added, “leaves no room for neutrality … because genocide is fundamentally a war against humanity."

At the end of July, Anglican Bishop James Langstaff of Rochester appealed in the House of Lords for sanctions against China in response to “gross human rights abuses.”

And Cardinal Bo wrote in a recent statement on freedom of religion or belief for all in the context of the controversy over Hagia Sophia in Turkey: “In China, the Uyghur Muslims are facing what amounts to some of the contemporary world’s worst mass atrocities and I urge the international community to investigate.”

There are, however, two major world faith leaders whose voices carry significant moral influence who have yet to speak: Pope Francis and Archbishop of Canterbury Justin Welby.

Perhaps they have had their reasons for biding their time until now. Yet now that so many of their own clergy are speaking out, the world will be looking to these two spiritual leaders for their response.

When it comes to genocide, crimes against humanity and mass atrocities, the world expects faith leaders to take a stand. As Dietrich Bonhoeffer said: “Silence in the face of evil is itself evil. Not to speak is to speak. Not to act is to act.”

Holy Father and Archbishop Welby, the world is waiting to hear you.

Benedict Rogers is East Asia team leader at international human rights organization CSW and a member of the Stop the Uyghur Genocide Campaign. The views expressed in this article are those of the author and do not necessarily reflect the official editorial position of UCA News. 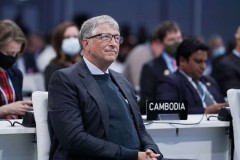