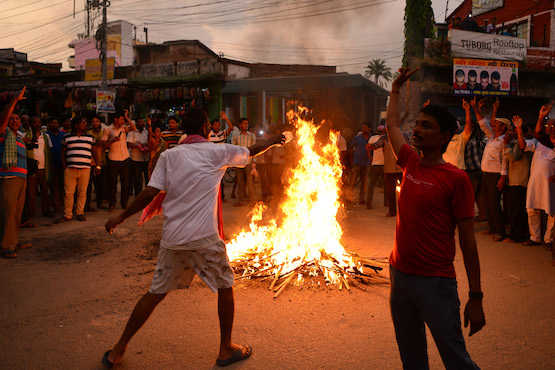 In this photograph taken on June 12 Nepalese Madhesi protesters, a marginalised group in the southern plains, chant slogans during a protest to say that new laws will leave them politically marginalized. (Photo by Prakash Mathema/AFP)

Religious communities in Hindu-majority Nepal need to press for changes to a new law impacting on religious freedom, which is inconsistent with the nation's international commitments.

While there has been ongoing discussion of some specific aspects of the law, many Christian leaders have yet to grasp its wider implications.

On Aug. 9, amendments were made to the country's 164-year-old general criminal code, known as the Muluki Ain.

The revised criminal code imposes sanctions for several offences not included in the old law.

Aspects of the new law can be considered as reforms.

One government representative previously maintained that the criminal code amendments would protect freedom of religious belief, but within certain limits.

A critic of this justification compared it to allowing a bird to fly freely, but only within a narrow cage.

In late 2015, Kamal Thapa, then deputy prime minister, maintained that changes to be introduced to the criminal code would ensure full religious freedom.

However, the wording of one clause is similar to that contained in the blasphemy laws of Pakistan.

And the provision could be misused to settle personal vendettas in Nepal, especially against Christians.

In June last year, eight Nepali Christians were charged with attempting to convert children after they shared a comic book on the story of Jesus.

And Christian homes were raided by police on the basis of false accusations of attempted conversion of non-Christians.

These incidents provided an insight into the sort of things that could happen under the new criminal code.

Citizens were invited to submit comments on the updated code by April 14, 2016.

However, Christian leaders maintain that more than 45,000 written submissions on issues of concern were overwhelmingly ignored.

Sensitive issues of religious belief should not be criminalized under the law.

There are several ethnic minority groups who privately eat beef. But the killing of cattle is taboo under Hinduism and minorities could face prosecution over the practice.

Changes to the criminal code are a clear indication that Nepal is moving away from its human rights' commitments.

Many people do not dare speak out openly on such a sensitive issue.

Nonetheless, parliamentarian Lokmani Dhakal is one of the few who has done so, calling for the protection of religious freedom.

He noted that Christianity in Nepal had always been seen as a foreign religion and also sometimes as a cover for outside spying.

Dhakal said Nepal should not introduce internal laws at odds with the international treaties it has signed.

Provisions of the amended criminal code could be used in an attempt to portray charitable activities of religious groups as a way of acquiring converts. Merely speaking about one's faith also risks accusations of attempted conversion.

Religious communities should call for the removal or amendment of objectionable clauses in the new law that are incompatible with Nepal's international commitments.