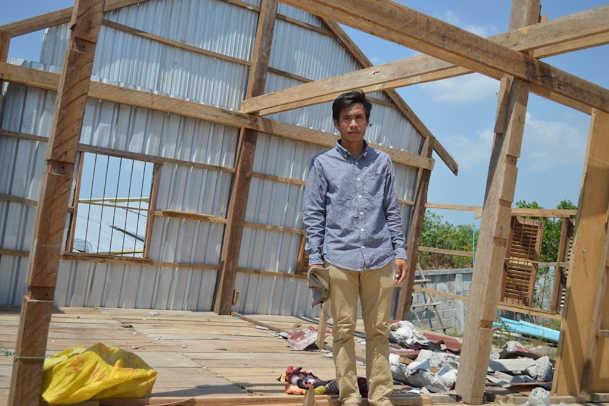 Chheav Sovannarith stands by his village home that was demolished during a raid by Cambodia security forces. (Photo by Ate Hoekstra/ucanews.com)

It's like a hurricane hit Chheav Sovannarith's humble home. Of the four walls that supported the roof, only one in the back is still standing. Large piles of rubble make it look as though Chheav and his neighbours live on a garbage dump.

But it wasn't a hurricane that struck the people of Koki, a village close to the Cambodian beach town of Sihanoukville. It was a large band of policemen, soldiers and military police. They came armed with sticks, guns, assault rifles and demolition equipment when the villagers of Koki protested against a forced eviction.

"We tried to block them, to stop them from destroying our houses," Chheav said in the shadow of a makeshift tent next to his demolished home. "But that didn’t work. They came with a lot of equipment and destroyed everything."

The violent crackdown on protesters took place on Jan. 24 after a court decided that a large part of Koki is owned by a politically connected tycoon. A 28-year-old man was seriously injured after a bullet hit his shoulder. A teenager, who was accused of throwing petrol bombs at the police, was beaten up, eyewitnesses said.

Human rights organisation Licadho said in a statement that it was clearly a case of excessive force being used. Sveng Vanly, a local Licadho coordinator, told ucanews.com that up to 300 members of the security forces moved against 200 to 300 villagers.

The villagers claim that they don't know who now owns the land, but they suspect the eviction is related to large-scale Chinese investment in the area. They worry that the land they lived on and farmed for years will soon be in the hands of Chinese businessmen.

Over the past two to three years, Sihanoukville has received more Chinese investments than any other place in Cambodia. It has transformed Sihanoukville from a relatively quiet beach town that mainly attracted Cambodian and Western tourists into a Chinese-run city with dozens of casinos and large hotels mainly catering for Chinese tourists. It’s estimated that 25-30 percent of the population of Sihanoukville is now Chinese.

Even though the casinos and hotels bring jobs for Cambodians, the price that the local people pay for the investment is high. Land and real estate prices, as well as rents in and around the city, have doubled or tripled. Pollution is becoming a major problem, with garbage piling up in the streets and thick layers of dust blowing around. Major roads are in a desperate need of repair, while basic utilities clearly aren't ready for the influx of tens of thousands extra people.

Land disputes on the increase

Sveng Vanly told ucanews.com that the number of land disputes has increased since Chinese money started pouring in. "Last year there were three new cases," he said. "Often it's about forest land where it is unclear who it belongs to."

Koki was also built on forest land. Mey Dorn, 58, remembers how he cleared a piece of forest in 2002 to use it for farming and to build a house for his family. "In all these years nobody ever told me this land belongs to someone else. I only found out that it was sold a few weeks ago, when the military came and told us we have to leave," he said.

His neighbor Chheav also said that he was unaware of a dispute over ownership until the day his property was destroyed. "I bought this land two years ago from someone in Sihanoukville," he said. "I then built the house myself. The land and property were recognized by the village chief. I don't understand how they can say that I don’t own this. Why don't we have any rights?"

No more than 10 minutes away from Koki, Chinese investments are impossible to miss. In walking distance from Otres beach, a once popular destination for Western backpackers looking for a cheap and laid-back holiday, new hotels and apartment buildings are under construction. Closer to the city, the first casinos appear and there are construction sites and businesses with large Chinese signs.

Licadho coordinator Sveng Vanly said the casinos and hotels at least create some employment for locals as well as outsiders. And those who are lucky enough to own real estate have a chance to make big money. "But for the poor in the city there's serious disadvantages," Sveng said. "In the past, they could rent something for 50 to 70 dollars. Now they need to pay 150 or 200 dollars. And the Chinese control a lot of businesses now, including hotels, restaurants and even taxi companies."

Sihanoukville may be the most popular investment destination in Cambodia for Chinese businessmen, but it certainly isn't the only place where Chinese influence is on the rise. In recent years China has become the largest foreign investor in Cambodia as well as the biggest aid donor. In January, China promised another US$587 million to Cambodia in aid funds during the next three years.

However, there are concerns that Cambodia will become too dependent on Beijing, especially now that Cambodia's ties with the European Union and the United States are under pressure because of the threat of sanctions and a possible ban from an EU-led preferential trade access scheme.

In Sihanoukville, the Chinese already make the rules, said Sophal Ear, a Cambodia expert and associate professor of diplomacy and world affairs at the Occidental College in Los Angeles.

"Is Sihanoukville still Sihanoukville if everyone who used to live there is removed and a bunch of Chinese are put in their place? Of course not! The government, in a normal place, would care about what people think and react accordingly. Not in Cambodia, where the golden rule applies: whoever has the gold, makes the rules. China has the gold, China makes the rules."

Back in Koki, Chheav Sovannarith fears for the future now that security forces want to evict him and others. But even though his house lies in ruins and he has only a small tent to sleep in, Chheav refuses to leave the area. Several other villagers are also drawing a line in the sand. "It's scary and we are worried, but we have nowhere else to go," Chheav said. "We've been here for many years. It's our choice to live here."