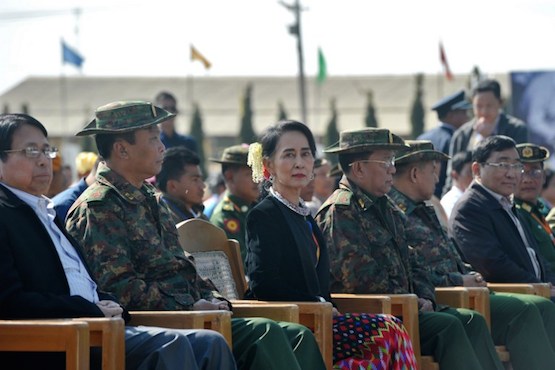 The New Mon State Party and the Lahu Democratic Union — both not currently engaged in fighting with Myanmar’s military — signed a ceasefire pact in Naypyidaw on Feb. 13.

The agreement of two more ethnic groups to sign the nationwide ceasefire agreement (NCA) is a milestone for the government after taking office nearly two years ago as State Counselor Aung San Suu Kyi seeks to revive the stalled peace process to end decades-long civil wars.

Suu Kyi has described the development as part of the initial stages in the formation of a democratic federal republic based on national reconciliation and aspirations for peace. She stressed the NCA itself is not the end of the peace process but the beginning of political dialogue.

Suu Kyi has pledged to end hostilities in Myanmar, which has been bedeviled by conflict for nearly 70 years. Renewed fighting in parts of the country have undermined her peace initiatives while also raising questions about how much power she actually has in dealing with the military.

Fighting in northern Kachin State between the military and the Kachin Independence Army (KIA) has intensified since early December resulting in the displacement of thousands of villagers. No armed groups in the north have signed the NCA.

Kachin State is 90 percent Christian and has been beset by sporadic fighting for several decades.

The KIA is among 13 armed ethnic groups, including the Ta'ang National Liberation Army, Arakan Army and United Wa State Army, who have yet to sign the NCA. Only eight groups have signed the agreement that was initiated by Thein Sein, the previous military-backed president.