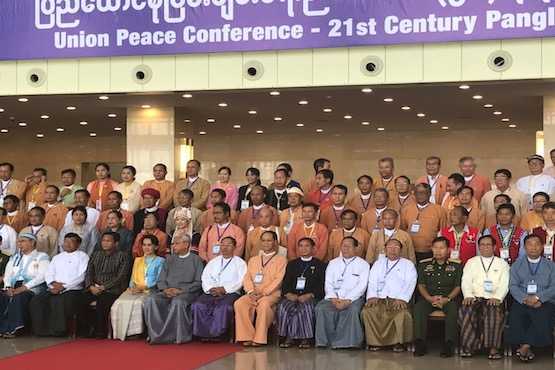 Two more armed ethnic groups in Myanmar, the Mon and Lahu, will sign the nationwide ceasefire agreement (NCA) but fighting in the north has escalated.

The New Mon State Party and the Lahu Democratic Union agreed to sign the agreement after a meeting with State Counselor Aung San Suu Kyi and military chief Min Aung Hlaing in capital Naypyidaw on Jan. 23.

The two groups have not engaged in fighting with Myanmar's military in recent years.

Fighting in Kachin State between the military and the Kachin Independence Army (KIA) has intensified since early December and has led to thousands of villagers and refugees fleeing to safe areas. No armed groups in the north have signed the NCA.

On Jan. 22, five mortar shells were fired near the early childhood center of Ndup Yang camp in Subrabum township, northern Kachin, that resulted in more than 900 villagers and refugees fleeing into forests.

Aid groups are still struggling to provide urgently needed shelter and basic food items as the only transport route of a waterway has been blocked by the military.

The KIA is among 13 armed ethnic groups, including the Ta'ang National Liberation Army, Arakan Army and United Wa State Army, who have yet to sign the NCA. Only eight groups have signed the agreement that was initiated by Thein Sein, the previous military-backed president.

Manam Tu Ja, a Catholic and chairman of the Kachin State Democracy Party, said it is a step forward for more armed groups to sign the NCA.

"Fighting must be ended in ethnic areas and both the military and the KIA need to negotiate openly and frankly to end fighting," Tu Ja, an ethnic Kachin, told ucanews.com.

San Awng, a Catholic and a member of Peace-talk Creation Group, an NGO in Myitkyina, the capital city of Kachin State, said it is not possible for the KIA to sign the NCA as fighting is continuing.

"Due to sporadic fighting, trust building between the government, the military and the KIA has lowered and more intense fighting erupted in ethnic areas under a civilian-led government," San Awng told ucanews.com.

He said more informal talks are needed to negotiate and solve the problems.

The agreement of two more ethnic groups to sign the NCA is a benchmark for the government after taking office 22 months ago as Suu Kyi seeks to revive the stalled peace process to end decades-long civil wars.

Suu Kyi has pledged to end hostilities in Myanmar, which has been bedeviled by conflict for nearly 70 years.

The third 21st Century Panglong Conference was due to be held in December but was postponed to January and now February as vital preparations are needed for the peace talks.

Khin Zaw Win, director of the Tampadipa Institute in Yangon, said it was not enough for just two ethnic groups to sign the NCA.

"Fighting is ongoing in the country's north, so the peace process is not reaching a satisfactory level," he said.

Observers fear long-running civil conflicts will be prolonged by the Rohingya crisis in Rakhine State.

More than 655,000 Rohingya have fled to Bangladesh in the wake of a bloody Myanmar military crackdown described by the United Nations as ethnic cleansing.

The violence in northern Rakhine has raised serious questions about how much influence Suu Kyi has over the military.

Kachin politician Tu Ja acknowledged that the Rakhine crisis is a major challenge for the NLD government as Suu Kyi's priority for peace appeared to be stalling.

"While the government has been trying to handle the Rakhine issue, unrest erupted recently in Mrauk U, so those are great challenges for the civilian government," Tu Ja said.

Political analyst Khin Zaw Win said the Rakhine crisis has underscored the Suu Kyi-initiated peace effort as the government is spending much of its time on solving the problems.

"But Suu Kyi needs to delegate and her government needs to prioritize the issues of Rakhine violence and peace at the same time," he said.