Myanmar State Counselor Aung San Suu Kyi has met with Kachin Baptist leaders to discuss prospects for peace in the country's north where sporadic fighting has been ongoing between the military and armed ethnic groups.

During the meeting, both parties discussed matters concerning the conflict in Kachin State which resumed between the Kachin Independence Army (KIA) and the military in 2011, ending a 17-year ceasefire agreement.

As part of their talks, they discussed the Nationwide Ceasefire Agreement (NCA) and the hoped-for rehabilitation of some 100,000 civilians displaced by the fighting and who remain in camps in both Kachin and northern Shan states

Speaking after the meeting, Rev. Samson said the military must stop its offensives. "This is the main barrier to peace," Rev. Samson told ucanews.com. "The government needs to have an influence over the military," he said.

Rev. Samson said he told Suu Kyi about restrictions on humanitarian aid especially in non-governmental areas and provided details on the education of children displaced by the conflict.

He said the meeting was a "positive development" and that they discussed their concerns "freely and frankly" with Suu Kyi.

"During the meeting, Suu Kyi stressed the importance of peace which would lead to the development of the country," said Rev. Samson.

Since assuming office in April 2016, Suu Kyi has pledged to end hostilities in the country, which has been bedeviled by conflict for nearly 70 years. In August of that year, she initiated the 21st Century Panglong Peace conference. A second five-day session was held in May this year.

The fighting in Kachin and northern Shan states remains a major hurdle to her civilian government which does not control the country's armed forces. 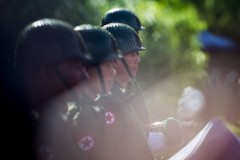 Manam Tu Ja, a Catholic and chairman of the Kachin State Democracy Party, said he believes Suu Kyi's main goal at the meeting was to have the KIA sign the ceasefire agreement.

"The meeting is part of her efforts in bringing these groups into the peace process," Tu Ja told ucanews.com.

Most of Kachin State's 1.7 million people are Christian and 116,000 are Catholics.

Suu Kyi's father, General Aung San reached an agreement giving autonomy to the Kachin, Shan and Chin ethnic groups in 1947 but the deal was never fulfilled. Aung San was assassinated and the ethnic groups took up arms against the central government.