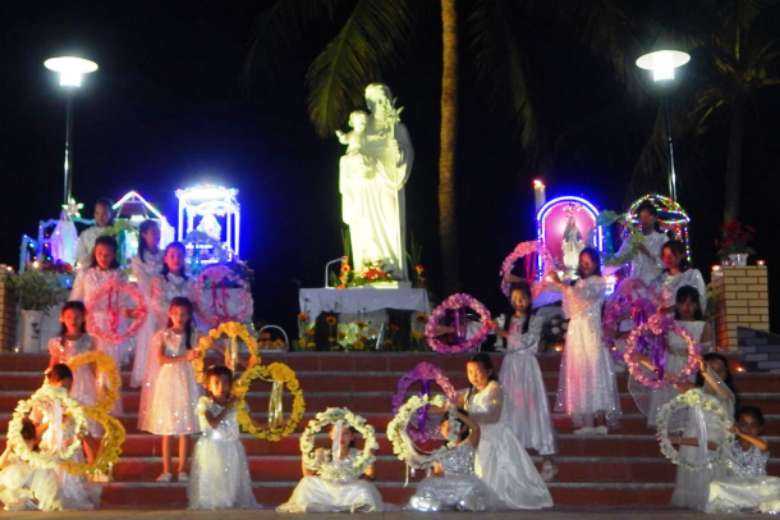 Mary Phan Thi Thuy was driven to her home from the Central Hospital in May after doctors failed to cure her breast cancer that had metastasized to her bones at the final stage.

Thuy, who sells fruit for a living, could not move her hands as they were all curled up. Her daughter was terribly depressed about her illness and could not do anything to save her.

Lying in bed, Thuy remembered the day when she was a child cooking food for hogs and her leaf kitchen had caught fire. She cried out “Jesus, Mary, Joseph” many times and luckily her father and brothers had returned from the rice farm and put out the flames.

“I started to whisper prayers of St. Joseph and looked up at the altar in my house,” she said, adding that she also continued taking medicine.

“I completely trusted Jesus’ foster father and sought his intercession for my healing. Now my health has improved noticeably and I no longer take medicines. I believe he saved me from danger,” said the 52-year-old mother, a member of Tay Linh Parish in Thua Thien Hue province.

“We pray daily for 15 minutes in front of a big statue of St. Joseph to show our deep gratitude to him after we attend Mass at our home church.”

Twenty-seven fathers changed their ways. They gave up the bad habits and began treating their wives, children and even neighbors well

Another woman, Mary Nguyen Thi Thoa from Tien Thanh Parish in Quang Dien district, recalled how she would fervently pray to St. Joseph during her first pregnancy.

Thoa, 37, works at a church-run daycare center while her husband is a construction worker.

She was faint and put on a ventilator while being rushed to hospital in an ambulance last August. “My husband said prayers to the saint and I gave birth to a baby boy,” she said, adding that she had no need for an emergency cesarean.

Thoa is sure they were blessed by the saint. The newborn weighed some 5 kilograms at birth. “We named our son Joseph to express our gratitude to the saint,” she said.

Father Andrew Le Minh Phu, parish priest of Mau Tai Church, says many Catholics have received various graces through healing, livelihood and so on during the Year of St. Joseph, Protector of the Church.

The priest said the impact of the Covid-19 pandemic had resulted in several men turning to gambling and alcohol addictions, causing major problems in families. He paid regular visits and counseled them to follow the example of St. Joseph and devote themselves to their families.

“Twenty-seven fathers changed their ways. They gave up the bad habits and began treating their wives, children and even neighbors well,” the 33-year-old priest said proudly.

The locals would gather to pray in front of St. Joseph’s statue on Wednesdays. They would request Mass to thank the saint for the blessings.

The parish concluded the Year of St. Joseph by holding a Eucharist adoration and offering flowers in front of the saint’s statue. The locals will continue to recite the rosary and prayers of St. Joseph on Wednesdays for the 2023 assembly of the Synod of Bishops.

Father Paul Tran Khoi, parish priest of Sao Cat Church in Lang Co town, said most of its 1,240 members are fishers who gather to pray to St. Joseph in the church compound on Wednesdays.

St. Joseph has sponsored the poor fishermen in central provinces. They enjoyed a bumper year of herrings, sardines, anchovies and other fish

This was no less than a miracle in a sea with declining fish stocks and the looming threat of Chinese fleets. In gratitude, the locals dried the fish and supplied it to people stricken with coronavirus in the southern provinces.

“St. Joseph has sponsored the poor fishermen in central provinces. They enjoyed a bumper year of herrings, sardines, anchovies and other fish,” the 63-year-old priest said.

They also cleaned church facilities, visited patients in hospitals and elderly people without relatives during the special year.

The priest said the parish will continue these acts of devotions to St. Joseph in the future.

He said that though Archbishop Joseph Nguyen Chi Linh of Hue could not concelebrate a public Mass to conclude the special year of the saint due to the pandemic, local parishes did hold Eucharist adorations and celebrations.