Hue Archdiocese territory covers an area of 9,799.7 square kilometers with a population of 2,295,000. It comprises two central provinces of Quang Tri and Thua Thien - Hue. It is bounded on the east by East Sea, on the west by the border of Laos. On the south it is bounded by the city and Diocese of Da Nang, and on the north by Quang Binh province.

The people are bound by strong family ties. The family is traditionally religious, and most local interactions are characterized by religious tradition. Most social celebrations are also related to religious and cultural events.

The archdiocese is home to ethnic groups of Bru Van Kieu, Chinese, Ko Tu, Ta Oi and Tay. It has Catholics from those ethnic groups.

Foreign Jesuits started to evangelize people in the archdiocese in early 17th century. Many people including royal families were baptized.

The archdiocesan territory has many religious sites where many local Catholics and foreign missioners throughout the country were put in prisons and killed for their faith during 18th -19th period of bloody persecution at the hands of imperial soldiers.

Bac Dang Trong (North Cochinchine) Vicariate was erected on Aug. 28, 1850 by Pope Pius IX. The vicariate had 24,000 Catholics served by two French missioners and 12 Vietnamese priests, and indigenous Adorers of the Holy Cross. It also had two seminaries.

In 1962 Archbishop Thuc attended the Second Vatican Council (1962-1965) in Rome and did not return home after his brother, the South Vietnamese president Jean Baptiste Ngo Dinh Diem, was assassinated in 1963. The assassination intensified U.S. involvement in the Vietnam War.

Archbishop Thuc stepped down in 1968 and died in 1984 in the United States.

Archbishop Thuc was the uncle of Cardinal Francis Xavier Nguyen Van Thuan who spent the last eight years of his life in Rome and served as president of the Pontifical Council for Justice and Peace from 1998 until his death of cancer at age 74 in 2002. Earlier he spent 13 years in detention under harsh conditions in his homeland.

Many local parishes were erected over the last 300 years.

Pastoral activities are focused on worship, youth apostolate, social action and pastoral work with the family. Devotions remain popular, but adequate success has been achieved to integrate these with liturgy. Thus, devotions to saints, who are local favorites, have been weaned off the novena syndrome and integrated with the celebration of the Mass.

Local Religious work with followers of other faiths to provide health care for HIV/AIDS patients. They also give spiritual and material support to poor people, patients and disabled people.

Local Catholics are given courses on Scriptures, catechism and liturgy.

The area suffers severe climate influenced by wind from Laos. Temperature is from 8-39 degrees Celsius. It is hit by many storms from September and October.

The territory has agriculture, fishing and tourism services. Rice is the main crop in the area. Hue, the former capital of the country's last Nguyen Dynasty (1802-1945), is famous for kings' tombs, imperial palaces and ancient Buddhist temples. 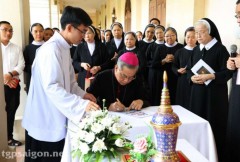