Cardinal George Alencherry, seen here at the Vatican in February 2012, has been removed from administrative duties in Ernakulam-Angamaly Archdiocese. (Photo by Alberto Pizzoli/AFP)

In an unprecedented move, the Vatican has bypassed the Eastern-rite Syro-Malabar Church's decision-making synod and taken away the administrative jobs of three prelates of an archdiocese beset with financial controversy and infighting.

Pope Francis appointed Bishop Jacob Manathodath of Palghat as the apostolic administrator of Ernakulam-Angamaly Archdiocese on June 22 with a mandate to stem financial controversies aggravated by disputed land deals.

"There remains the grave and worrying" situation of division between priests, auxiliary bishops and Cardinal George Alencherry, said a letter from Cardinal Leonardo Sandri, prefect of the Oriental Congregation.

It said the administrator's primary job is to seek "healing of these fractures and eventually propose solutions that require the intervention of the Synod of Bishops," the supreme decision-making body of the Syro-Malabar Church based in Kerala.

The archdiocese was embroiled in a controversy in November 2017 when the presbyteral council, the canonical body of priests, publicly accused Cardinal Alencherry, the major archbishop, of being part of dubious land deals.

The priest-representatives told media that the cardinal, two senior priests and a real estate agent had sold several plots of land at undervalued prices, incurring a loss of more than US$10 million. They also accused the cardinal of bypassing the canonical body.

The letter from Cardinal Sandri said the administrative powers of auxiliary bishops Sebastian Adayantrath and Jose Puthernveetil have been suspended. The letter also suspended all archdiocesan offices and its council, giving the new administrator the freedom to reshape them or constitute new ones.

The letter asked the new administrator to conduct an audit of the archdiocese by an independent agency and send the result to only the Apostolic See in a confidential manner.

It said Cardinal Alencherry "should absolutely not be involved" in any decisions. However, the administrator may appoint a synodal committee to help him, but it should have only a consultative role.

The new administrator is also mandated to ascertain the responsibility of people "who have wounded church unity with unfounded allegations, lacking the spirit of obedience and ecclesial sense," which resulted in a "public scandal damaging the Syro-Malabar Church." 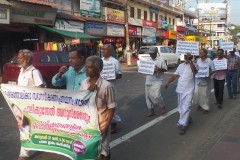 It is first time in the history of this Asian Church that the Vatican has suspended the administrative powers of all the bishops in a diocese, said a senior priest who asked to remain anonymous.

"It shows a grave situation of ethical violations and the inability of the synod to effectively settle the issue," he said.

The situation forced the Vatican to bypass the synod that became self-governing in 1992, he noted.

The apostolic administrator has appointed a new vicar-general, financial officer, chancellor and pro-vice-chancellor in the archdiocese. He also issued a circular sending a message of reconciliation to Catholics, which was read out in all parishes on June 24.

The allegations of financial irregularities have sullied the reputation of the archdiocese. "We will be able to rebuild this if everybody cooperates," it said.

Cardinal Alencherry refused to comment on the developments. However, his supporters do not see the Vatican intervention as a setback for him.

Santhimon Jacob, a vocal supporter of the cardinal, claimed the Vatican move does not mean anything as the cardinal had already delegated his administrative powers to the two auxiliary bishops in the wake of the land controversy.

He also noted the assertion in Cardinal Sandri's letter that the Vatican move comes at the recommendation of the cardinal and the synod.

The cardinal's critics, however, feel that an impartial investigation into the land deals could even lead to his exit from his current positions.

Father Kuriakose Mundadan, former secretary of the presbyteral council and a member of the six-member committee that probed the land deals, said the Vatican has given clear instructions to get to the bottom of the issue.

"The instruction to have an independent audit and to send its report only to the Vatican shows that they want to know the truth. We are confident that Pope Francis will side only with the truth," Father Mundadan told ucanews.com.

He said he and other priests are not worried about disciplinary action. "We have been raising the issue in the internal forums of the church since September 2017. None, including the members of the synod, gave us any convincing explanation or moved to act."

Father Mundadan said they were forced to speak in public because of inaction. He said the Vatican intervention comes after the priests' body made two representations to the Vatican.

Bishop Manathodath, 71, who was ordained a priest in Ernakulam-Angamaly Archdiocese in 1972, will continue as bishop of Palghat while having the additional responsibilities of administrator.