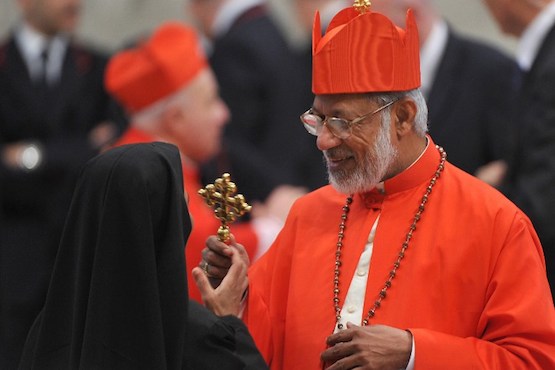 A nun kisses the cross of newly appointed Cardinal George Alencherry prior to a Mass led by Pope Benedict XVI at the Vatican in February 2012. Police in the southern Indian state of Kerala charged the cardinal with conspiring to commit fraud on March 12 in relation to church property deals. (Photo by Alberto Pizzoli/AFP)

The Vatican and local bishops' bodies are taking flak for ignoring concerns expressed by India's Syro-Malabar Church in the southern state of Kerala over land deals that resulted in millions of dollars in losses to a local diocese and saw police file criminal charges against Cardinal George Alencherry on March 12.

Police have charged the major archbishop with breach of trust, conspiracy and cheating in executing land deals over the last two years that incurred losses of over US$12.5 million to his Ernakulam-Angamaly Archdiocese.

He is the prime accused in the case that allegedly involves the clandestine sale of real estate in and around Kochi, the commercial capital of Kerala.

The charges against the clergymen at this Eastern-rite church come as an 18-month wrangle between Cardinal Alencherry and a group of priests came to a head one week ago in the form of a street protest demanding that he relinquish his office as major archbishop.

Some 200 priests met at St. Mary's Cathedral on March 9 and marched to the prelate's residence urging him to relinquish the office of major archbishop at least until the criminal charges had been resolved.

Two days later, another group of 200 laypeople visited the same residence declaring their support for and solidarity with the clergyman.

They marched along public roads shouting slogans denouncing the priests and carrying placards declaring their support for the spiritual head of the church, which has a following of about 5 million people.

As battle lines were drawn, another group of Catholics demonstrated in front of the cardinal's residence demanding a law be enacted to ensure the participation of lay people in management of church properties to guard against fraud.

However, this ugly turn of events could have been avoided if the church had activated systems to resolve the contentious issues in the past two months, said Father Paul Thelakat, a senior priest of the archdiocese.

Many priests and lay people in the area appeared to share similar sentiments.

"We have informed all the legitimate church authorities, including the Vatican, of the issues. Had there been a creative intervention, these issues would not have come to pass," Father Thelakat, a former spokesperson of the church, told ucanews.com. Priests recently led a march against Cardinal Alencherry demanding he temporarily vacate office to allow the police criminal investigation into him to proceed unhindered. He is shown here in a 2013 file photo. (Photo by Alberto Pizzoli/AFP)

Father Kuriakose Mundadan, secretary of the Presbyteral Council, a canonical body of archdiocesan priests, said soon after the issues came to light the cardinal appointed an enquiry committee on Nov. 29 last year to study the land deals conducted since January 2015.

The committee submitted its report to the cardinal and the Presbyteral Council on Jan. 4 and a copy was also sent to national and regional bishops' forums as well as the Vatican, Father Mundadan said.

"But we received no response. Cardinal Alencherry neither accepted nor rejected the report. What does that mean?" Father Mundadan asked.

"There is a crucial moral and financial issue. The authorities can't just hush it up by burying their heads in the sand," he said.

Cardinal Baselios Cleemis, the major archbishop of Syro-Malankara Church, also based in Kerala, said it was not fair to blame the Vatican.

"Syro-Malabar Church is a sui-juris [self-governing] church. They have their own synod to resolve issues," he told ucanews.com on March 12.

There are "no grounds to blame church authorities for inaction," he said.

He made the remarks after a meeting with priests, Cardinal Alencherry and Archbishop Soosa Pakiam of Trivandrum, president of the regional bishops' council.

Cardinal Cleemis said he and Archbishop Pakiam were trying to "help out in our personal capacities."

The national bishops conference also has no role to play in the controversy, said Bishop Theodore Mascarenhas, its secretary-general.

He said the Catholic Bishops' Conference of India only coordinates the bishops' forums of the three ritual churches on matters of national concern.

"It is meaningless to blame the Vatican, which has its own systems and workload," he said. "We can't hold the Vatican to account for actions carried out by certain priests."

"The Vatican has its limitations here," Bishop Mascarenhas said.

"This is an independent church with a synod empowered to administer church affairs, including the election of its bishops."

Cardinal Alencherry was the first major archbishop elected by the synod in 2011, seven years after it was given full administrative powers.

However, the synod has no powers to suspend or impeach a major archbishop, legal experts told ucanews.com.

Bishop Mathew Arackal of Kanjirapally, a member of the synod, told ucanews.com on March 13 the body will "meet at the earliest time" to take stock of the latest developments.

He said it met in January and freed Cardinal Alencherry of his official duties in the archdiocese, which it then entrusted to his auxiliaries.

The cardinal is now only empowered to "exercise the office of major archbishop," he said.

"He is no longer acting as the bishop of the archdiocese. And yet some priests want him to step down," Bishop Arackal added.

Father Mundadan clarified that the priests who led the march were not asking the cardinal to step down permanently.

"We just want him to leave the office temporarily because his involvement in this case is embarrassing for the church," he said. "A clergyman who is facing a criminal investigation should not lead liturgical functions as the head of the church.  If he vacates the office, it means the police can wrap up their investigation faster."

He added that local law enforcement officials may find it harder to conduct a probe into the cardinal while he still ranks as the head of a politically influential religious body.

The Latin rite follows the Roman liturgy introduced by European missioners in the 15th century, while the two Eastern rites, both based in Kerala follow Syrian Church traditions and trace their origins to St. Thomas the Apostle.