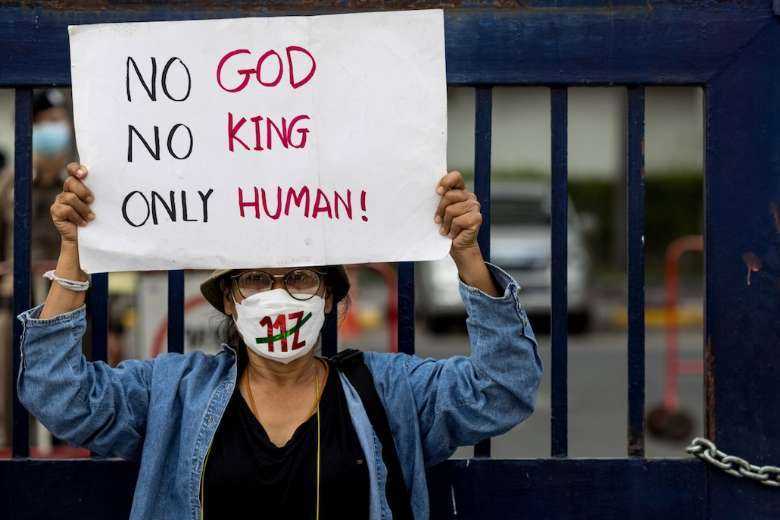 A woman holds a placard outside the Criminal Court during a protest against Article 112, Thailand's royal defamation law, in Bangkok on Dec. 22. (Photo: Jack Taylor/AFP)

Rights advocates have accused Thai authorities of neglecting the health of political prisoners after a prominent democracy activist in prison came down with a severe illness that was allegedly left untreated.

Arnon Nampa, 37, developed a high fever late last week in Bangkok Remand Prison, where he has been held without bail ahead of his trial on charges of royal defamation, according to Thai Lawyers for Human Rights (TLHR).

As an outbreak of the Omicron variant of the coronavirus that causes Covid-19 is sweeping Thailand, Arnon’s supporters are concerned that he may have contracted the disease.

“The Bangkok Remand Prison must allow medical workers to check on his illness and to find out if he has Covid or not,” said Noraseth Nanongtoom, a lawyer with the rights group.

“Lawyers from TLHR have visited him and found out that he was ill, and it was confirmed that Arnon has a high fever. But at the moment, we do not know what he’s sick with.”

Arnon, who has been a key figure in youth-led pro-democracy protests in the country ruled by a military-allied regime, contracted Covid while in prison in May last year.

Several other democracy activists who were detained ahead of their trials on various charges also contracted Covid-19 last year as a result of unhygienic conditions in Thailand’s notoriously overcrowded prisons.

The health situation of these political prisoners “is always tenuous. And that seems to be what the callous, royalist regime wants,” the website added.

Arnon, a rights lawyer, has been charged with 24 counts of royal defamation, a crime punishable by up to 15 years in prison per count, over various comments he made during pro-democracy rallies regarding the monarchy.

If convicted on all counts, Arnon, who has been detained since August last year, could be sentenced to as many as 360 years in prison.

“It is Arnon’s and other protest leaders’ intention to no longer seek for bail because the court keeps on denying their right to bail,” Noraseth said.

In all, more than 160 predominantly young Thais, including several high school students, have been charged with royal defamation over the past year in what rights advocates say is a concentrated effort by the government to silence all criticisms of the monarchy.

[The law] reflects the culture and history of Thailand, where the monarchy is one of the main pillars of the nation, highly revered by the majority of Thai people

Pro-democracy activists have been calling for the institution to be reformed along democratic lines; however, such calls have been declared a threat to national security by the Constitutional Court, which in a decision late last year effectively equated reform demands with treason.

The United Nations and various prominent rights groups have been calling on the Thai government to scrap the controversial royal defamation law, which they say constitutes a severe violation to the freedoms of speech and conscience.

However, the government has defended the law, saying its “existence is closely linked to safeguarding the key national institutions and national security” in the words of a government spokesman.

“[The law] reflects the culture and history of Thailand, where the monarchy is one of the main pillars of the nation, highly revered by the majority of Thai people,” Nadhavathna Krishnamra, a representative of the Thai government, told the United Nations Human Rights Council at a meeting last year.