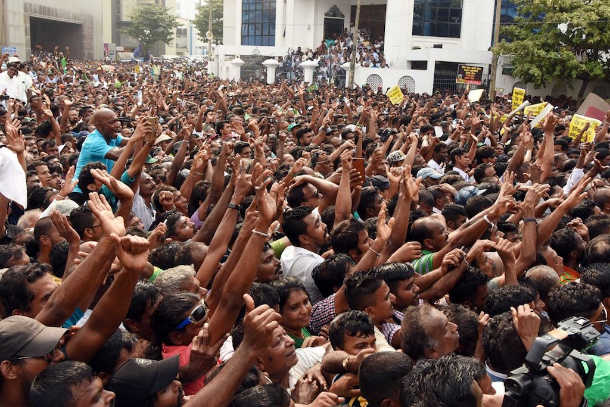 Religious leaders in Sri Lanka say the constitution is the supreme law and the arbitrary removal of a sitting prime minister in an unconstitutional manner risks reducing the country to a state of instability, fear and chaos.

President Maithripala Sirisena sacked Prime Minister Ranil Wickremesinghe and his cabinet on Oct. 26 and replaced him with ex-president Mahinda Rajapaksa.

Sirisena announced without consulting the Speaker that the next parliament session would not be held until Nov. 16. Then on Nov. 2 Speaker Karu Jayasuriya said the parliament would instead reconvene on Nov. 7.

A massive crowd including rights activists gathered in capital Colombo on Oct. 30 to protest the unconstitutional power transfer.

The president has come under pressure from civil society and the international community to reconvene parliament and adhere to rule of law and democracy.

The Catholic Bishops' Conference of Sri Lanka called on all political parties to put aside their interests and respect the constitution to resolve the conflict.

"The nation has already suffered because of the long civil war — enough blood has been spilled," conference president Bishop Winston S. Fernando said in a statement on Oct. 31.

"The rule of law and democracy should prevail through decisions taken faithfully following the constitution in this moment of crisis.

"It is not to remain in power or to obtain power, but to put ourselves at the service of people and the common good, for the development of the country, exploiting all the resources and realizing the great potential that is found in people and natural resources in our beloved land."

Anglican Bishop Dhiloraj Canagasabey said he was shocked and dismayed when he learnt about the swearing-in of Rajapaksa as PM on Oct. 26.

"That short-term expediency should not take precedence over ethical standards is something rooted in the teaching of all religions that we claim to profess in the country," he said.

"The public service, the police and the armed forces should remain faithful to the constitution and conduct themselves in a manner worthy of their office."

Rajapaksa ruled the country from 2005-15 and ended the 26-year civil war by defeating Tamil rebels in 2009. More than 100,000 people were killed or disappeared during the war. Rajapaksa's family members and some of his cabinet ministers were accused of human rights abuses and corruption during his period in power.

The National Christian Council of Sri Lanka also came out against the political move.

"We are a wounded nation recovering from war and violence and, amid severe economic burdens on the people, we cannot at any cost afford another crisis which could plunge the country into further chaos," it said in a statement.

"It is our belief that the matter should have been best resolved in parliament in a transparent manner with adherence to stipulated and clear procedures."

President Sirisena reportedly sacked Wickremesinghe because of the alleged involvement of a cabinet minister in a plot to assassinate him.

Wickremesinghe said the president's decision was illegal and unconstitutional. He has stressed that he remains the prime minister.

The National Christian Evangelical Alliance of Sri Lanka said it was deeply saddened by the sporadic instances of violence that have been reported and called on law enforcement officials to maintain peace and act with responsibility.