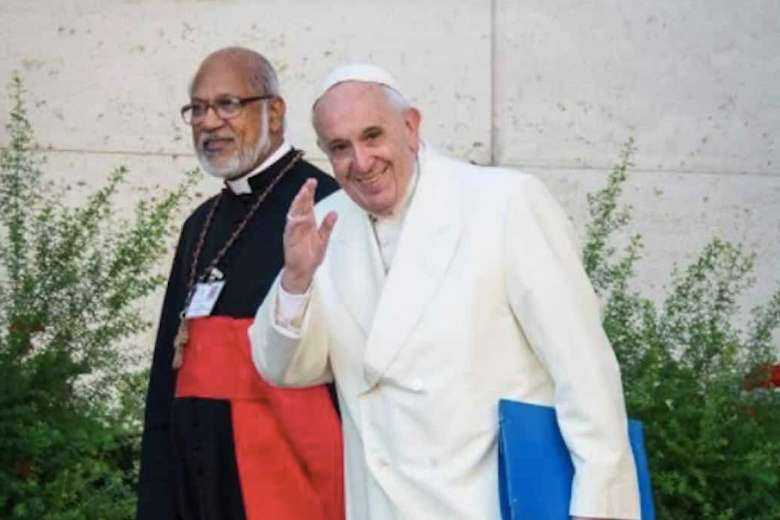 A federal agency has initiated a probe against Cardinal George Alencherry, head of India’s Syro-Malabar Church, on money-laundering charges which a church official said were part of a conspiracy to tarnish the church and its leader.

The Enforcement Directorate (ED) under Prime Minister Narendra Modi's government, which probes financial crimes, has started investigating the dealings of Cardinal Alencherry in connection with the sale of church land that reportedly resulted in a financial loss to the Archdiocese of Ernakulam-Angamaly.

“The ED move to probe the cardinal is no doubt an attempt to target him and tarnish the image of the church,” said Father Abraham Kavilpurayidam, the spokesperson of the Syro-Malabar Church.

The cardinal is the major archbishop of the Syro-Malabar Church based in Kerala state that has some five million members in India and abroad.

Father Kavilpurayidam told UCA News on Oct. 25 that the latest move against the cardinal comes after a local court exonerated him and a special police team in Kerala found no basis to the allegations.

“A special team of Kerala police’s Crime Branch probed all the allegations thoroughly and gave him a clean chit” in October last year, the priest said.

The police team investigated allegations of money misappropriation but submitted its report to the court to dismiss the case as it is based on “a mistake of facts.”

Ernakulam District Court also dismissed the charges against the cardinal last month, saying “there are no prima facie grounds to proceed with the case.”

The fresh probe “is part of a conspiracy to tarnish the image of the cardinal and the church he heads,” Father Kavilpurayidam said. “Cardinal Alencherry is being persecuted through no fault of his own. The cardinal surely will come out of it clean.”

The priest recalled that several false cases had accused Cardinal Alencherry of causing huge losses because of land sales he executed as head of Ernakulam-Angamali Archdiocese.

The ED probe, just as the other complaints, is based on an allegation that the cardinal received unaccounted money.

The Income Tax Department had earlier imposed a fine of 60 million rupees (US$799,000) on the archdiocese for alleged financial discrepancies.

The police team’s report shows the probe examined 83 persons including Cardinal Alencherry and scanned documents including the land registry of the archdiocese, financial transactions and other related documents but could not find merit in the charges leveled against the cardinal and 23 others, including a couple of priests.

The allegations against the cardinal entered the public domain in November 2017 after a group of priests in the archdiocese publicly accused him of selling off several plots of land over a period of two years, incurring a loss of some US$10 million to the archdiocese.

Although the district court dismissed one case, the cardinal is facing trial in seven other similar cases that accuse him of conspiracy, breach of trust, cheating and related charges in connection with land dealings.

The cardinal had appealed to Kerala High Court to discharge him from the allegations, but the court in its Aug. 12 order dismissed the appeal and asked him to face the trial.

Father Kavilpurayidam and other Catholic officials say a group of people are working against the cardinal. “All these cases are registered to discredit the cardinal before the public and also the vibrant church he heads.”

“Truth will surely triumph, even if it takes some time,” said a priest who did not want to be named.