Indonesian high school students attend the first day of national examinations at a state senior high school in Jakarta on April 14, 2014. Reports of violence in schools has sparked debate on how to deal with the problem. (Photo by Romeo Gacad/AFP)

Concerns are rising in Indonesia over school violence following the circulation of a video, in which a male high school student is allegedly brutally beaten by a teacher in a classroom.

The incident happened at a high school in Pontianak, West Kalimantan, on Nov. 2 and the student was reportedly admitted to a local hospital for treatment.

However, an official at the Education Ministry who investigated the case denied the perpetrator was a teacher and said it was a fellow student upset after he had been mocked by the victim.

"He went berserk, beating the victim while another student filmed him," Hamid Muhammad, an official at the ministry told reporters on Nov. 7, adding that education institutions must be free from any form of violence.

The case is the latest in a series of violent attacks in Indonesia's schools.

In 2015, Indonesia had one of the highest rates of school violence in Asia, according to research by Plan International and the International Center for Research on Women (ICRW).

The research, which studied Cambodia, Vietnam, Indonesia, Pakistan and Nepal, showed 84 percent of children in Indonesia — higher than the Asian average of 70percent — had experienced violence in classrooms.

In late September, a 38-second video showing a pre-school teacher in Jakarta pulling and dragging a schoolgirl on the floor went viral on social media.  The teacher was fired and the child suffered trauma.

Father Vinsensius Darmin Mbula, chairman of the National Council of Catholic Education, said school violence had tarnished the face of education in the country.

"Ideally, a school shapes the character of students to learn to love, not resort to violence," he said. 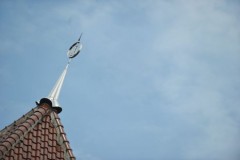 "This shows that ways of solving problems by dialogue and discussion are still not becoming a habit."

Child rights activist Devi Thiomana said incidents of rampant violence in schools showed they cannot be a place of moral and ethical development.

"If it is not responded to immediately by the relevant parties, then it is not impossible that such immoral behavior will become habitual," she said.

Maria Fransiska, a single parent in Jakarta, said news of school violence made her anxious for her daughter who is in senior high school.

"What can be expected if in school they act like that," she said. "It's hard to imagine what they will do when they are in the community.”

Retno Listyarti, head of the education unit at the Indonesian Child Protection Commission, said many schools have no system to deal with complaints of violence.  In 2015, the Ministry of Education issued regulations on the prevention of, and, how to deal with violence in schools.

"Because a system does not exist, it is generally difficult for children when they are abused," she told ucanews.com.

She added, that learning from the Pontianak incident, they have coordinated with the Education Ministry to better deal with similar cases.

"We formed a team on Nov. 7 to coordinate prevention methods and have a quick response to handle new cases," she said.