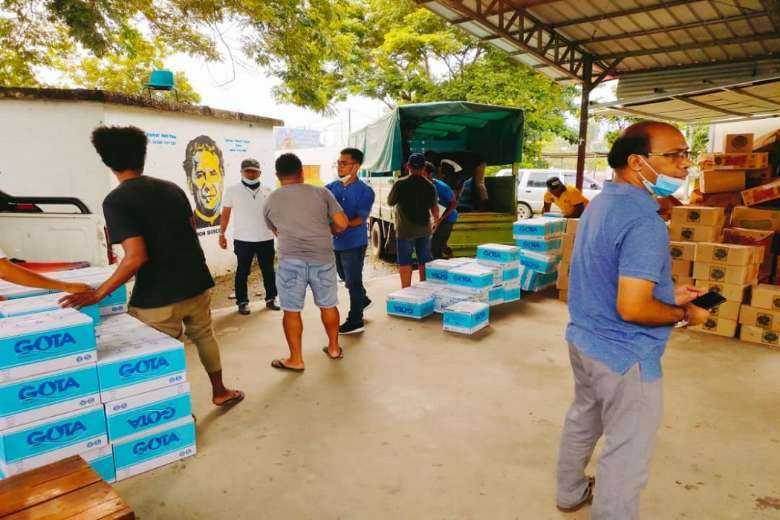 Relief supplies are unloaded for victims of flash floods at a training center run by the Salesians in Comoro, near Dili. (Photo supplied)

Priests and nuns in Timor-Leste have joined efforts to provide much-needed assistance to flash flood victims forced to flee their homes in recent days following storms that have struck the Catholic-majority country since Easter Sunday.

Many of those who fled have sought shelter at church-run facilities.

The country has recorded at least 36 deaths, 30 are still missing and thousands have been displaced by the flash floods triggered by torrential rain which also struck Indonesia’s predominantly Christian province of East Nusa Tenggara.

"The Catholic Bishops' Conference of Timor has ordered priests and nuns to respond and serve them as best they can," he told UCA News.

So far, they have helped provide basic needs including cooked meals.

Father Salshina said around 2,000 victims were being helped by the Church at a Salesian-run training center in Comoro on the outskirts of Dili and 7,000 more were receiving assistance in Immaculate Conception Parish in Dili.

"We desperately need basic foodstuffs and clothing for children and the elderly," he said.

Ruben Goncalves, a Dili resident, said the weather has improved, but many people are still not able to return home.

"I am fortunate to live in a place in the highlands. The worst affected are those who live along rivers whose houses must have been washed away," he said.

In a meeting with the Interministerial Commission for Civil Protection and Natural Disasters on April 5, Prime Minister Taun Matan Ruak thanked all those involved in responding to the floods, including religious organizations, development partners and civil society organizations.

He directed commission members to speed up efforts to support affected people and restore damaged infrastructure, sanitation and power systems.

The government has relaxed Covid-19 lockdown rules to enable recovery efforts to be conducted more smoothly. They include making building supplies available to people in need of materials for reconstruction of their homes.