Around 3,000 people a day will be able to cross using special bus services but will have to take virus tests 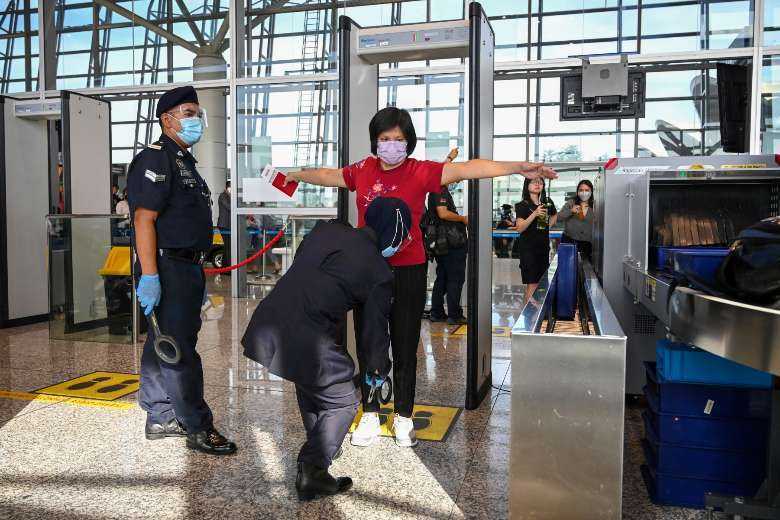 An airport security officer inspects a passenger before she departs on a Singapore Airlines flight in Kuala Lumpur International Airport on Nov. 29. (Photo: AFP)

Singapore and Malaysia eased coronavirus travel restrictions on one of the world's busiest land borders today after nearly two years, allowing some vaccinated people to cross without quarantine.

Before the pandemic, about 300,000 people used to commute across the border from Malaysia every day to the neighbouring city-state to work in areas ranging from public transport to electronics manufacturing.

But most travel was abruptly halted in March last year, leaving many who previously commuted, and other Malaysians in Singapore, effectively stuck there as they needed to continue working.

From today, vaccinated Singaporean and Malaysian citizens, those holding permanent residency status and work permits can cross the one-kilometer causeway separating the countries without having to quarantine.

"I feel happy to be able to go back and meet my family finally after two years," Eunice Teoh, a Malaysian getting the first bus from Singapore under the scheme, told AFP.

"I do feel a bit nervous because this is the first batch, and I'm not really sure what will happen," added the 28-year-old, who works in finance and was heading to the Malaysian state of Pahang.

Restrictions were also eased on air travel, with vaccinated people allowed to fly between the countries' main airports without quarantining

Initially, around 3,000 people a day will be able to cross using special bus services, and will have to take virus tests.

Officials say the first stage is aimed at workers who have been unable to see families for some time, and they plan to expand it later to other groups.

Malaysian Prime Minister Ismail Sabri Yaakob made an official visit to the city-state to mark the start of the initiative, doing a fist-bump with Singapore counterpart Lee Hsien Loong as they met at a border checkpoint on the causeway.

Restrictions were also eased on air travel, with vaccinated people allowed to fly between the countries' main airports without quarantining.

Christine Soong was heading from Malaysia to visit family members in Singapore.

"I have three grandchildren and they all miss me so much, so they're very excited," the 69-year-old told AFP at Kuala Lumpur airport. "They've been counting down the days since we booked the flight."

Prior to the easing of curbs, citizens and some other groups were still allowed to travel between the neighbours, but they had to quarantine on arrival.

Both Malaysia and Singapore -- which were part of the same country during a stormy, two-year union in the 1960s -- have high vaccination rates.

Singapore's outbreak has been mild by global standards, although Malaysia faced a serious wave this year driven by the Delta variant.

Malaysians have long been a key part of the workforce of wealthier Singapore, which has a population of just 5.5 million, and then can typically earn higher salaries than back home.

The easing of curbs comes despite the emergence last week of the heavily mutated Omicron strain, which is starting to spread around the world.