Anies Baswedan (C) and his running mate, Sandiaga Uno (R) attend an inauguration ceremony at the Indonesian Presidential palace in Jakarta on Oct. 16. (Photo by AFP)

Governor Baswedan should make a specific commitment to defend the rights of the city’s vulnerable economic, sexual, and religious communities, Human Rights Watch said in a letter to the governor who assumed office on Oct. 16.

Baswedan should ensure the rights of Jakarta’s religious minorities, including its Shia, Ahmadiyah, and Christian communities, and protect them from harassment, intimidation, and violence by Islamist militants, and ensure that they have access to essential government services, the letter said.

He should also deliver on campaign promises that forced evictions in urban areas should never leave people homeless or vulnerable to further human rights violations..

Human Rights Watch also expressed deep concern about Baswedan’s use of the term pribumi (native sons) in his inaugural address. The term has long been used to imply that peranakan (Chinese-Indonesians or mixed-race Indonesians) and others were benefiting at the pribumi’s expense.

The rights group said Baswedan should refrain from using the term as an important step toward creating a more tolerant capital.

“Governor Baswedan should use the power of his office to protect and defend the human rights of all Jakartans, rather than stoke the fears of the Muslim majority,” Adams said.

“His governorship will be measured in large part on delivering on Indonesia’s national motto of ‘Unity in Diversity.’” 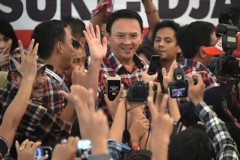