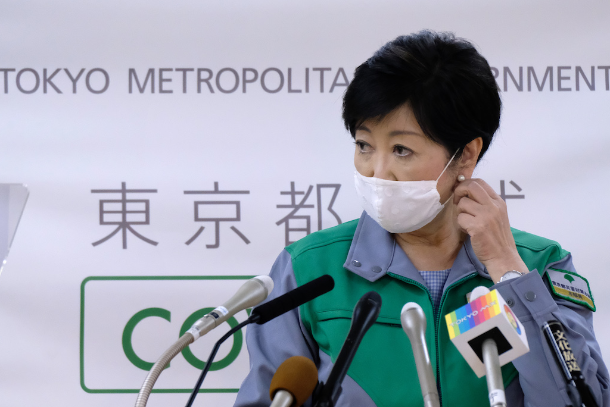 This picture taken on July 15, 2020 shows Tokyo Governor Yuriko Koike during a press conference at the Tokyo Metropolitan Government office. Koike said there were 293 new COVID-19 infections in the capital on July 17, 2020 breaking the city's record high set the day before. (Photo: Kazuhiro Nogi / AFP)

After excruciating tribulations, this past April, the Tokyo Olympic Games were postponed to 2021.

Amid the global pandemic as the Japanese authorities are trying to figure out if they can guarantee public safety during the next year's event, the Japanese people have already made up their minds.

In a post-Covid19 world, the Games don't seem so appealing after all, as 60 percent of the population would not want the Olympics even next year.

According to the results of the telephone survey conducted on voters nationwide in March, nine percent wanted the games cancelled.

This is despite the recent re-election, for a second term as Tokyo governor, of Yuriko Koike, who is a promoter of the Games, but whose latest political campaign has cleverly shifted the focus on the current Covid-19 crisis.

"I could not get the tickets to see the Games, but now I wouldn't want to go even for free," says Yuki, 52, a golf instructor, while he plays with his 2-year-old child outside the brand new Tokyo National Stadium.

"How can the government expect to test all the people coming from hundreds of countries, I'm seriously afraid of the safety of my son."

According to experts and virologists, even if a vaccine is found, staging the Olympics next year would be an arduous challenge. Deputy Prime Minister Taro Aso has been more straightforward, calling it the cursed Olympics.Yuki thinks the government should instead focus on what has been acknowledged as the real illness affecting the country for years."I wish more resources would be spent on trying to increase the population, for example, by supporting families. I have only one child, but if I could get more financial support, I would definitely have more."
Related News Thank you. You are now signed up to Daily newsletter
The current system provides 15,000 yen (US$150) for the first three years of the child, which becomes $100 from the third year. Given the rise in the cost of living and the stagnating salaries, the figure is a mere tip.Also, consider that in Tokyo on the average private elementary school costs at least $400 per month, and the waiting list for admission in pre-schools has been crammed for years. Only recently more pre-schools were created, which shortened the waiting list to 2,300. The figure was five times that two years ago. The budget spent by Koike to reduce the queue was $1.3 billion. In comparison, the new National Stadium had a price tag of $1.4 billion and has not pleased everyone."They should have renovated the old stadium instead of constructing a new one, by doing so, they would have kept a much bigger portion of the park and saved a lot of money," says Masumi, 74, a pensioner, who visits the park every weekend for long walks.The Games were promoted as eco-friendly since the Olympic medals were made out of recycled electronics, including old smartphones, and the roof of the new stadium was built using tons of local larch and cedar.But walking around the other sport center in Odaiba, where the swimming competition should have taken place, it is evident that the environment was not taken into account.Wada, 57, a part-time editor at a local magazine, has witnessed the change of the landscape from her perspective on the 10th floor of a building overlooking Odaiba Bay."They prepared all the infrastructure for the Games, but they never managed to clean the seawater," she says.Last year during the Triathlon World Championship, athletes from all over the world dived in for the competition and to the embarrassment of the local authorities openly complained – also on social media – of the ghastly condition of the sea."Now a hasty purification with special algae and oysters has started. But it will take time," Wada says.Apparently, the organizers of the eco-conscious Olympics had not noticed that the environmental impact was the last concern in the city's development plans. The frenzied construction of the boom in 1960s and 70s have left behind a sewer system that only in 1995 had reached all 23 districts of the capital.Odaiba is still a major problem. In a recent study, faecal matter levels in the water were found to be 10 times above the safety level. All you need is an unusual downpour for sewage treatment plants to be overwhelmed automatically release the excess waste directly into the sea without any filter.Just across the canal stands the Olympic Village that was supposed to accommodate 11,000 athletes from 128 nations were the Olympics not postponed. At the end of the Games it was to be sold to 5,000 families. Almost 900 apartments have already been traded, but now everything is suspended.The complex had been dubbed "the city where it all starts." But the impression you get from talking to the citizens who live around is quite the opposite."Before the Village was built there was a nice park for barbecues and also a concert hall. Now it's just buildings and no green. I don't know who would want to come and live here," says Hiroshi, 63, who comes here to jog every day."It takes 20 minutes just to get to the closest subway, and it's incredibly windy. When there is a typhoon, it must be horrible," he adds.To accomplish the Village's construction, Tokyo governor Koike had to sell the state lands cheaply to persuade the builders in the project. For this reason, now she will have to deal with a group of citizens who have sued her.Nakano-san, 66, who leads the protesters, said when he asked the authorities for the land evaluation studies, he found that the land was sold at 10 percent of the market value. When he insisted on having an explanation of that dilapidated patrimony, he was told that it was for the good of the Olympics.Yet what's right for the Games and what's best for the citizens couldn't seem to be farther apart.