He entered the Don Bosco Academy High School in San Fernando, Pampanga, and later the University of Santo Tomas (UST) in Manila where he received a Bachelor of Science degree in Industrial Education.

He completed his Bachelor of Sacred Theology in the same university.

For five years from 1992, he served as vice-provincial of his Salesian province. 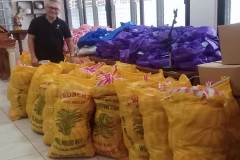