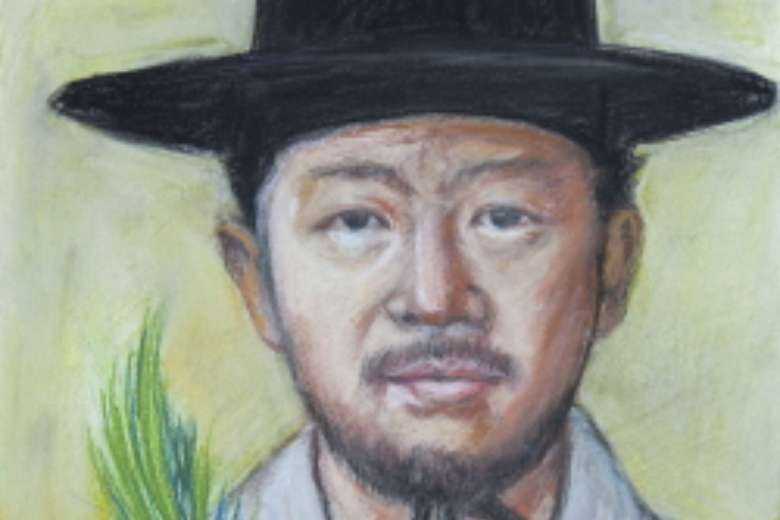 Bishop Pius Moon Chang-woo of Jeju blessed the memorial in the presence of local clergy, religious and faithful including three descendants of the martyr on Jeju island on April 23, reported Catholic Times of Korea.

Among the dignitaries were Father Francis Cho Han-geon, director of the Korean Church History Research Institute that co-sponsored the initiative, and civic leaders from South Korea’s largest island.

The memorial hall consists of an underground chapel and an exhibition hall on the first floor. The exhibition hall showcases historical material related to the life, faith and work of the martyr.

The exhibition features a story on Kim’s sea voyage from Jeju to China where he was saved by British sailors amid strong wind and waves. It goes on to detail his arrival in Hong Kong, his baptism and his return to Korea, where he met various Christian leaders including prominent Korean priest and evangelist Thomas Choe Yang-eop. A letter from a missionary priest dated Dec. 29, 1864, confirms that Kim also made a sea voyage to Nagasaki in Japan.

Face of Light is an artistic representation of Kim’s face that adorns the exhibition hall.

“We must realize that prayer and worship are for ourselves, not martyrs. I look forward to seeing people flocking here for the purpose"

During the blessing ceremony, Bishop Moon said the memorial hall is meant for local Catholics to pray for themselves through intercession of the martyr.

“We must realize that prayer and worship are for ourselves, not martyrs. I look forward to seeing people flocking here for the purpose,” Bishop Moon said.

According to Korean Church records, Kim Gi-ryang was born in a Buddhist middle-class family on Jeju island in 1816.

He went on to become a businessman and traveled from one place to another by ship. During a sea voyage in February 1857, his vessel was caught by strong winds and waves. A British ship rescued him and his fellow mariners. However, all except Kim died due to extreme exhaustion.

Kim was sent to missionaries from the Paris Foreign Missions Society (MEP) in Hong Kong, where he received training in catechism. He was baptized on May 31, 1857, by Father J.J. Rousseille, the MEP vice-superior in Hong Kong. He took the Christian names Felix and Peter and returned to Korea.

Back home, Kim met with Catholic missionaries and became a close associate of Father Thomas Choe, who assigned him to evangelize and offer catechism classes to communities and seafarers on Jeju.

Catholics in Korea were facing persecution unleashed by the staunchly Buddhist rulers of the Joseon dynasty. In 1866, thousands of Korean Catholics were massacred for refusing to renounce their faith.

Kim was arrested in 1866, imprisoned and tortured for propagating Catholicism. However, he was defiant amid persecution and told local faithful to cling to their faith. "I am ready to die for God, so don't change your mind but follow me," he said.