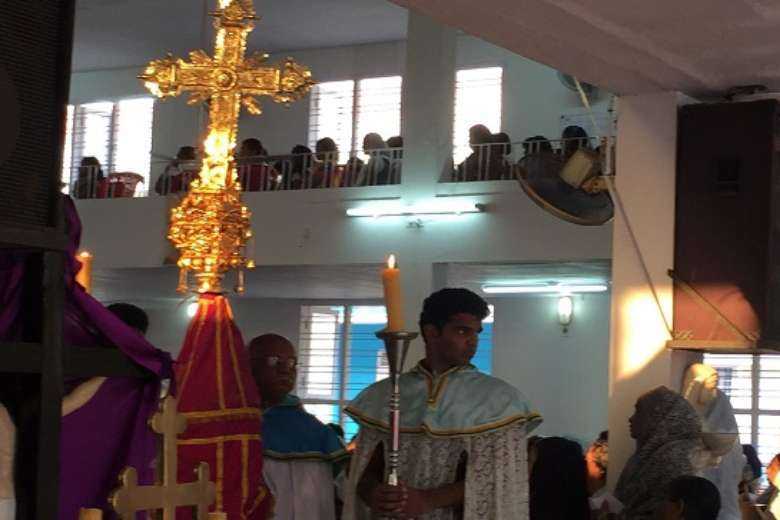 Catholics get ready for Mass in a church in Kochi, Kerala state, the base of the Syro-Malabar Church. (Photo: UCA News)

A group of Catholics in the southern Indian state of Kerala burned effigies of Cardinal Leonardo Sandri, prefect of the Vatican's Congregation for the Oriental Churches, and Cardinal George Alencherry, head of the Eastern-rite Syro-Malabar Church, to protest their stand on the five-decade-old liturgy dispute.

The protesters also called for a total boycott of Cardinal Alencherry even as church officials called for punitive action against those involved in burning the effigies. The media commission of the Kerala-based Syro-Malabar Church termed it as an open challenge to the Church and the pope.

Father Alex Onampally, secretary of the media commission, said in a March 17 statement that “actions would be taken against those involved in burning effigies of cardinals as per the provisions of the Canon Laws.”

The fresh protests against the cardinals broke out following their approval of a uniform Mass, ignoring a demand from laity and priests from the Archdiocese of Ernakulam-Angamaly to allow them to celebrate Mass facing the congregation throughout. The archdiocese is the second-largest diocese in India with a Catholic population of close to 500,000.

The Syro-Malabar synod of bishops in August 2021 decided to follow a uniform liturgy in all its 35 dioceses in India and abroad and granted time until April 17, 2022, to fully comply with its order.

However, the 1999 synod decision could not be implemented in all dioceses then due to widespread opposition. Catholic laity and priests in Ernakulam-Angamaly Archdiocese, the seat of power of Cardinal Alencherry, opposed it and insisted on continuing with the priest facing congregation throughout the Mass.

They refused to compromise and asked the synod to grant legitimacy to their way of celebrating Mass even as the other 34 dioceses agreed to follow the new order.

After priests and laity joined together and staged public protests including a hunger strike against the synod decision, Archbishop Antony Kariyil, the metropolitan vicar of Ernakulam-Angamaly, granted dispensation to the diocese after consultation with the Vatican including Cardinal Sandri.

Cardinal Sandri, however, in his latest communication on Feb. 28 backed the decision of the synod, asserting that “liturgical laws enacted by the synod have the force of law everywhere in the world.”

Cardinal Alencherry released Cardinal Sandri's letter to the bishops, priests and the laity on Mar. 11 and urged everyone to follow the synod, apparently with an intention to settle the dispute once and for all.

Cardinal Sandri also ordered Archbishop Kariyil to revoke the dispensation given to the archdiocese on the plea that the prelate had no such right to grant dispensation to an entire diocese.

Besides this, Cardinal Sandri also attempted to curtail the power of Archbishop Kariyil by ordering him to consult Cardinal Alencherry on the issue of dispensation, thus enraging the laity and priests in the archdiocese.

Over 300 priests from Ernakulam-Angamaly Archdiocese held a six-and-half-hour meeting at the Archdiocesan Renewal Centre in Kalloor in in Kerala state under the leadership of Archbishop Kariyil and passed a unanimous resolution against revoking the dispensation given to the archdiocese.

They also urged Archbishop Kariyil and the Vatican to approve their mode of celebrating Mass as a liturgical variant and grant approval to it rather than forcing the synod Mass on them.

The resolution also said any attempt to revoke the dispensation would lead to further conflicts in parishes and urged Archbishop Kariyil to personally call on Pope Francis and apprise him of the situation.

JOE DS
Careful on this Pope and stick to time tested teachings of the church with no deviation as some call for acceptance of gay lifestyle, gender change through puberty blockers and surgeries, acceptance of assisted suicide of elders etc etc. Stand for the Truth as it could be very soul. Today in 444prophecynews.com a prophecy is given on this Pope. Jesus have mercy !
Reply

BASIL ANTONY
Cardinal Alanchery is a fraud involved in 16 criminal cases. He sold land belonged to Ernakulam Angamaly Arch diocese worth 100 crores and swindled the amount. Income tax department imposed a fine of Rs. 5.50 crores for these illegal land deals.He should be stripped of the post of cardinal and head of syro Malabar church with immediate effect.
Reply

NIMMY ANTONY
The priests and laity of Ernakulam-Ankamaly Archdiocese are totally depressed and disappointed as they are being continuously ignored by Cardinal Alenchery who sold out lands belonging to Archdiocese at extremely low price and has looted the funds leading the Archdiocese to major financial crisis. For the past 4 years the laity are protesting and trying to meet Cardinal to have a face to face interaction to discuss and to arrive at an amicable solution. But Cardinal Alenchery is not willing for any type of interaction. This is provoking the priests and laity.
Reply

VARGHESE PURAKKAT
It is a matter of shame to the whole Roman Catholics in India that an inefficient and accused pilferer of Ernakulam diocean money Mr. Cardinal George Alencherry, the head of Syro-Malabar church in Kerala intentionally paved way for a situation like this. It points a finger at him because he is trying to obliterate the fishy deal in land of the Diocean property to take away 300 crores of rupees. As everyone knows he is facing litigation in Kerala for evading tax and steaing diocean money. A change in the leadership of the Syro Malabar church in Kerala will boost the respect of the believers in the church. Actually it a tug of war between the Arch diocese of Changanacherry and that of Ernakulam which has been going on for the last 50 or more years here. Ridiculously enough the Changanacherrians have changed even the word-famous Ash Wednesday to Ash Monday here through the early Cardinal Antony Padiyara in Ernakulam Diocese which later was not observed here. It is also believed that the high priests of the Changanacherry Arch Diocese have upper hand in Vatican regarding the Kerala matters so that the real situation is not presented to the Pontiff. ALAS!!!!
Reply

JOHN K M
Cardinal Alenchery is a criminal. about 21 case's were registered against him in various Indian Judicial courts, most of them are in criminal nature like forgery, fraud, un holy nexes with real estate business by derogating Canon laws.After a huge cry of both laities and priests Vatican ordered an enquiry to this matter and appointed an international agency M/s. KPMG to submit the report. they submitted the report to Vatican. Then Vatican ordered to Alenchery for restitution and keeping peace in the eparchy of Ernakulam Angamaly. So far he didn't turned to this, and blamed Vatican for their actions against a sui juris Church. To mask this Vatican order he used Cardinal Sandri as his protector, and the many decade's old liturgy issues was forwarded in the last Synod. Cardinal Sandri and Alanchery played a dirty politics to cover up the restitution order of Pope. The beneficiary and benefactor relationship ship of Cardinal Sandri and Alanchery troubled the entire Eparchy of Ernakulam Angamaly. The laities and priests gave several appeals to the Synod.But the brutal mind of Alanchery worst the situation again and again. At last the worst was happened, but see now it's in the form an effigies, this is a warning. Either walk together with God's people just as Pope Francis do or go to the hell.the laities and priests hate the un holy nexus of Cardinal Sandri and Alanchery. K M John
Reply