Father Marlito Ocon with some of the donations received by Jesuits at the Philippine General Hospital in Manila. (Photo courtesy of Father Ocon)

A group of Jesuits in the Philippines have taken up the challenge of preparing meals for doctors, nurses, and Covid-19 patients at one of the largest government hospitals in the country.

Jesuit Father Marlito Ocon posted on Sept. 26 pictures of his brother Jesuits preparing meals after a week of working at the Philippine General Hospital, a government facility in Manila with 1,500 beds and 4,000 staff.

The Jesuits are chaplains at the hospital giving the sacraments to the sick and dying, many of whom have been Covid patients since the pandemic struck the Philippines.

They began feeding medical frontliners and Covid patients after Father Ocon shared a story of a construction worker eating a pack of biscuits given by a family member.

“During my usual round at the hospital, I saw a patient — a construction worker — who was very thin and who could hardly eat, breathe or move. He was holding a pack of biscuits [the only thing his young daughter could afford to send] … He opened the pack with his teeth without seeing a letter was attached,” Father Ocon wrote on his Facebook page.

After posting the story, generous Catholics volunteered to help so that the Jesuits could feed hundreds of poor patients at the hospital

“I was flooded with text messages informing me of their donations … they are mostly from simple, working and struggling daily wage earners.” Father Ocon said.

The Jesuits pooled the donated money to finance a small soup kitchen to cook meals for hospital staff and patients.

Father Ocon said it was a sad state of affairs when people who do not have much to begin with are sharing what they have while government funding is lacking.

He was referring to a corruption scandal in which US$1.3 billion in government funding for the Covid-19 pandemic was allegedly mismanaged and equipment overpriced.

The government is also under fire for not giving health workers promised benefits and coronavirus risk allowances. 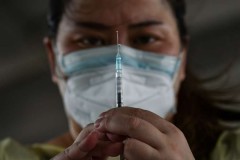 “While our rich politicians and other government officials are busy investigating and denying how they are taking away taxpayers’ money, these simple poor people shared what little money have,” Father Ocon said.