During October thousands of women, men and children attend special rosary prayers to honor the mother of Jesus 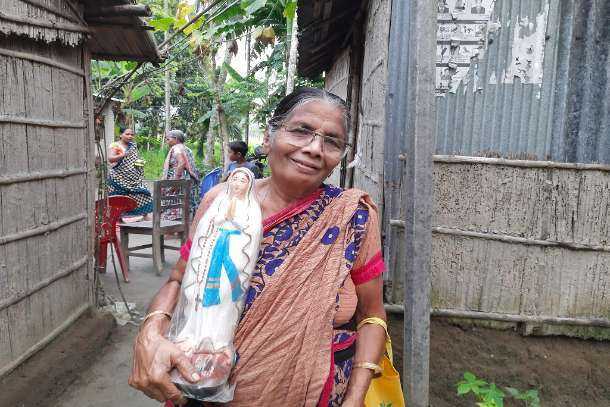 For Francisca Palma, devotion to Mother Mary and praying the rosary every evening are both a family tradition and part of daily life.

During October, the month dedicated to Mary and rosary in the Catholic calendar, Palma has been joining hundreds of women, men, and children in villages in her parish in northern Bangladesh attend special rosary prayers with door-to-door processions. "With my son and daughter, I have joined various rosary prayers in villages. People come to pray voluntarily and attend actively," Palma said.

The 55-year Catholic woman, a retired primary school teacher, lives in Maria Virgo Potens parish under Rajshahi diocese. Her family holds "Mother Mary in high regard and pray the rosary every evening. We inherited this tradition from our forefathers, and we are happy to continue it," Palma told UCA News. She said this October they have been praying the rosary "with special intentions — for the end of violence against women, for peace in the world and welfare of humanity."  The prayer intention refers to the alarming rise in rapes in the country, she noted. Father Suresh Purification, the rosary ministry coordinator in Rajshahi diocese, said various Marian devotion activities are carried out throughout the year. "Not only in October but all the year round we organize programs and prayer meetings. People love Mary, and they believe Mary fulfills their prayers. We help people realize how they can be blessed by praying to Mary," Father Purification told UCA News.

Rosary continues to be the common form of evening prayer in Catholic families. As a tradition, such prayers are pushed by mothers.

During October, they join community rosary prayers at a shrine or family or in the parish church. It encourages families to pray rosary if they do not do it already, she said.

Catholic tradition holds that rosary prayer began after Mary appeared to Saint Dominic in 1206. Mary gave a rosary to the Spanish Catholic priest, founder of the Dominican Order. She also wanted him to propagate the efficacious prayer, according to the tradition.

In Muslim-majority Bangladesh, Christians, the majority of them Catholics, are a tiny minority accounting for less than half a percent of the population of more than 160 million.

The family rosary movement began to spread in Bangladesh in the 1950s thanks to Irish Holy Cross priest, Father Patrick Peyton (1902-1992). He is widely known as "the rosary priest" for his lifelong efforts in popularizing rosary prayers around the world.

Father Peyton popularized the phrase, "The family that prays together stays together."

The priest visited East Pakistan (now Bangladesh) in 1955 and preached in two parishes of Dhaka archdiocese on the importance of rosary prayers. Since then, Catholic dioceses made significant efforts to popularize rosary prayer.

All eight Catholic dioceses in Bangladesh have Marian shrines, where people flock regularly to pray and pay respects to Mary.

In each diocese, a team works "with various age groups. And, we can have religious vocations also from them," Holy Cross Father Elias Palma, national director of the HCFM, told UCA News.

During each program rosary beads, prayer books, calendars, portraits, and statues of Mary are distributed to people in order to encourage them to keep praying the rosary, the priest noted.

The interest in rosary prayer is declining these days for various reasons, rues Francisca Palma.

"Not all are interested in rosary prayer. Sometimes, we see people leaving the place in the middle of the prayer. Parents don't pray and offer moral education to children, and sometimes they dislike religious leaders and don't listen to their call for prayers," she said.

But the crisis can be managed "if families, communities, and parishes play their role properly," she said.

Father Palma (not related) said the drop in interest is caused by modern media aggression.

"It is true family prayers have dropped due to modernity, media, and busy life of people. We have continued our movement to keep up prayerfulness in our families," the priest added.