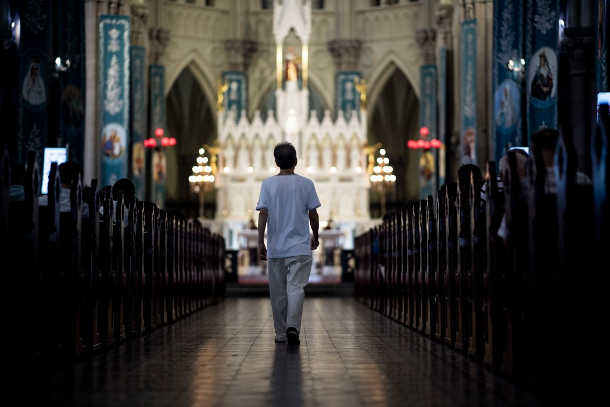 A Catholic worshipper walks toward the altar as people attend a Mass at the Chinese government-sanctioned St. Ignatius Catholic Cathedral in Shanghai on Sept. 30. (Photo by Johannes Eisele/AFP)

The number of netizens in China reached 802 million this year, while the internet penetration rate stands at 57.7 percent among an official population of 1.4 billion.

According to patchy statistics provided by the authorities in 2016, there were already about 300,000 religious websites running in the Chinese language two years ago, a number that had been "rapidly expanding."

Edward Xu Yihua of Shanghai's Fudan University pointed out that the development of religiously themed websites has subverted the traditional model of international religious communication.

"The correspondence between the 'world-wideness' of the internet and the 'universality' of religions means that, when combined, they can get their messages across more widely than by any other means of evangelizing," he said.

"This raises the ability of religious organizations to carry out direct evangelization, and enhances their ability to mobilize the grass-roots population to serve their political agenda and participate in global affairs," he added.

Religious movements that operate online in China have thus begun receiving the attention of the state.

To cope with this challenge to its authoritarian rule, the Chinese Communist Party (CCP) has built up a strict system of censorship including its notorious firewall to filter politically sensitive messages that are unfavorable to the regime.

The CCP was in the past more concerned about hostile forces abroad using the internet to "infiltrate" the country, especially with religious messages.

In recent years, however, the party has come to realize that different religious organizations — including non-official religious groups and organizations — within China have enthusiastically turned to the internet to spread their messages.

This highlights what an important medium it is in terms of contributing to the revival of various religions.

Within this developing "cyber world" we now have a virtual space in which religions can operate. Activities that can be conducted online include giving prayers, chants, sermons, preaching, worshipping gods, and settling of group affairs and performing liturgies.

China's rules and regulations governing religions (the "Regulations on Religious Affairs") have lost some of their strength in this digital realm, representing a breach of state control.

After taking office in 2013, Xi Jinping stressed that more attention should be paid to safeguarding the internet which dovetailed with his renewed emphasis on promoting a socialist ideology and national security.

At a symposium on cyber-security and informatization on April 19, 2016, Xi pointed out that "the internet is not a place outside the judiciary."

"Using the internet for actions such as advocating to overthrow the regime, inciting religious extremism, propagating the fission among ethnic groups and instigating violent terrorist activities must be resolutely prohibited and fought with. It must not be allowed to do its job," he said.

At a national conference on religious affairs a few days later on April 23, Xi for the first time mentioned that, "[the party] has to attach great importance to the issue of cyber religions. The religious theories and policies of the party should be vigorously promoted, and [only] positive voices should be spread online."

This foreshadowed the CCP's decision to launch a comprehensive cleaning up of the web and its stepped up monitoring of the cyber world.

A few months earlier in February, the CCP proposed amending its Regulations on Religious Affairs by formally incorporating Articles 47 and 48, which refer to religious activities online, into the scope of the state's control over religious affairs.

On Dec. 27 last year, a forum was organized in Lianjiang county of Fuzhou in southern Fujian province on the theme of the internet and religious affairs.

Department chief Huang Jinfa stressed in his welcoming speech that, "the rule of law should be strengthened so it is strong enough to deal with security issues related to religions that operate online."

"The goal of Sinicization should be pursued in order to build a good ecology for religions that function in cyberspace," he said, adding that the party must "strengthen its management of cyber religions."

On Sept. 10 of this year, the State Administration for Religious Affairs (SARA) issued a formal notice to solicit public opinion on what measures the Administration of Internet Religious Information Services could prepare to adopt to monitor the activity of religions online.

The notice clearly defines religious information online as including "any information about the doctrines, knowledge, culture and activities of religions disseminated by the medium of texts, pictures, audio materials or videos via internet websites, apps, forums, blogs, microblogs, public accounts, instant messaging tools and webcasts."

So who is legally qualified to provide "religious services" online?

Previously, religious groups and believers in China could register websites regardless of whether they were legally recognized by the state. They could also come forward and share information about religions through various channels.

To better control this, the notice stated that only "legal persons, or unincorporated organizations set up in accordance with [Chinese] law" and which operated within Chinese territory, could submit an application to register such sites.

The notice stipulated that, with the exception of religious organizations, academic institutions and venues for religious activities, no reference to religions like Buddhism, Catholicism, Protestantism, Taoism and Islam could be used in the official titles of news-issuing website domains.

Those who are eligible, and who wish to engage in religious internet information services, must submit their application to their respective provincial religious affairs department by filling in a certain form.

Successful applicants are given a permit allowing them to conduct religious information services online for a period of up to three years.

Article 16 of the notice stipulates that obtaining such a permit "can and is limited to preaching by religious personnel on their own internet platform."

It further states this must be monitored in accord with a real-name registration system.

No other organizations or individuals are allowed to "preach" online, or forward or create hyperlinks to related religious content, the notice stated.

Article 17 states that religious institutions that obtain the permit "can and are limited to providing religious education and training for their students and religious personnel on their own internet platform [while] the provision of training [must be] monitored by the real-name registration system."

No other organizations or individuals [are] allowed to launch religious education and training on the internet," it added.

This can be seen as an attempt to comprehensively block any "unauthorized" institutions from conducting religious education online.

To put it bluntly, the authorities want to completely eliminate religious activity from cyberspace to confine it within prescribed "activity venues."

All for social harmony

Article 16 of the same notice requires religious personnel to restrict their preaching online to "interpreting parts of doctrine that are conducive to social harmony, progress, and a healthy civilization; and guiding followers to believe and act in the proper way."

This matches Xi's ideas about the Sinicization of religion. The addition of criteria like "conducive", "progressive" and "healthy" reflect an acceptance of "the guidance of socialist core values" while also guarding "resolutely [against] the infiltration of Western ideologies and consciously [resisting] the influence of extremist thoughts."

Meanwhile, Article 15 lists 14 types of behavior and content that are strictly outlawed. They are as follows:

(1) Using religion to incite subversion of state power, to oppose the leadership of the CCP, to overthrow the socialist system, to split the country, to undermine national unity and social stability, to promote extremism, terrorism, ethnic separatism and religious fanaticism;

(3) Destroying the harmony among different religions, within the same religion, or between religious and non-religious citizens;

(5) Going against the state's principles of independent, autonomous and self-management of religions;

(7) Conducting commercial promotions in the name of religion, and selling or distributing religious articles, internal publications, or illegal publications;

(8) Harming citizens' health in the name of religion, or acquiring property by means of coercion or defrauding others;

(10) Using religion to impede the implementation of policies of the judiciary, education, marriage, and social management, which are defined by the laws of the country;

(14) Violating the Regulation on Religious Affairs and other related laws, regulations, and rules.

As stated earlier in Article 48 of the revised Regulation on Religious Affairs, "the content of religious internet information services" has also been regulated, with the following prohibitions put in place. It is now illegal to do anything that:

(1) Destroys the harmony between religious and non-religious citizens;

(2) Destroys the harmony among different religions, or within the same religion;

(3) Discriminates against and insults religious and non-religious citizens alike;

(4) Promotes religious extremism and incites ethnic hatred, a splitting of the country and terrorist activities;

(5) Goes against the state's principles concerning the independent [from the Holy See], autonomous and self-management of religion.

The decision to increase the five clauses included in the revised regulations to the 14 clauses listed in the more recent notice shows how widely the Party is now casting its nets.

The content of the notice soliciting public opinion shows us how Xi's move to "raise the standard of the legalization of religious works" represents the principle of "rule by law" rather than the "rule of law".

Jerome A. Cohen, a professor of law at New York University School of Law, is considered an expert in Chinese law.

He said recently that Beijing's new slogan for governance might be described as "Leninist Legalism."

In his eyes, the law has become a tool allowing the party-state to strengthen its control over the citizenry.

The government appears hell-bent on putting the brakes on various forms of religious revival, starting by managing its myriad incarnations online "in accordance with the law" in the interests of "maintaining national security, social harmony, and religious harmony."

Once the draft is implemented, the freedom that religions in China now enjoy online will certainly be curtailed.

The first to suffer will be those faith communities that are not recognized by the government, as they will undoubtedly be "expelled" from cyberspace.

Even those religious organizations and activity venues that are recognized by the state will face limitations when disseminating religious information.

For example, they will only be allowed to promote (religious) policies that align with the views of the one-party state, and show content regarding the Sinicization of different religions in a positive light.

This means no texts, photographs or other audio-visual material can be put on Chinese websites, apps, forums, blogs, micro-blogs, public accounts, instant messaging devices or live-streamed if it has a religious theme.

This is a serious violation of people's freedom of speech and freedom of expression. It proves once again that the "Orwellian Empire" is attempting to establish a new order for religions that fit the interests of the party.

Christianity in China in this era of totalitarianism has already faced — and will continue to face — serious and potentially frightening challenges.

The question is: How should Chinese churches and Christians respond and get along?

Ying Fuk-tsang is director of the divinity school at the Chinese University of Hong Kong.