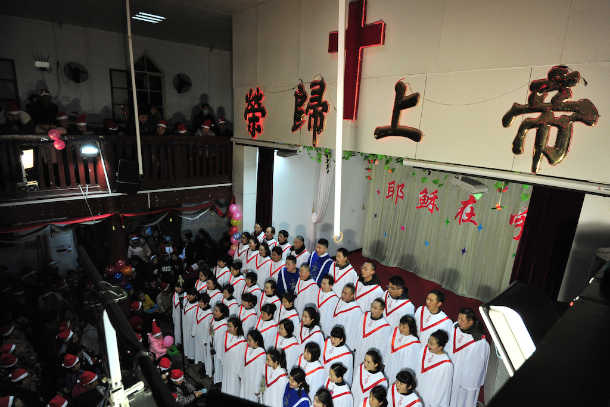 Chinese Christians attend a Christmas Eve Mass at a church in Fuyang in Anhui province in 2017. The central committee of the Chinese Communist Party has published revised regulations on disciplinary action to dismiss members who have religious faith. (Photo by AFP)

The central committee of the Chinese Communist Party (CCP) has published revised regulations on disciplinary action that will strictly enforce the dismissal of party members who have religious faith.

The committee revised the regulations "in accordance with the new trend, mission and requirements" after the 19th CCP National Congress last October that placed discipline in the overall strategy of party building in the new era, the state-owned China News Service reported.

The regulations, which will take effect on Oct. 1, were published on Aug. 25 along with a circular issued by the committee requesting party members in all departments and regions to implement them seriously.

In the revision, disciplinary provisions on party members having religious beliefs are mainly in articles 61 to 64.

The regulations previously stated that party members who engineered, organized or exploited religious activities against party and state directives, policies and resolutions and undermined national unity and the party's organization were to be placed on probation within the party. But the revision means that such members will be dismissed from the party.

Party members who only participate in religious activities were previously punished with a warning for a "minor offense" but the revised regulations do not mention minor offenses and all must be dealt with seriously.

The new article 62 says that "ideological education shall be strengthened for those party members who have religious belief." If they fail to improve with the aid of the party, they shall be urged to resign. If they are unwilling to resign, they will be taken off the party's rolls.

Articles 58 and 63 stipulate that "those who organize and participate in superstitious activities are given a sanction of expulsion from the party when the crimes are serious."

John, a Catholic in Hebei province, said the CCP has revised the regulations to strengthen its ideology and achieve the goal of controlling its members "because they now feel that they are somewhat uncontrollable."

The Epoch Times, a multi-language newspaper headquartered in New York City, reported in July 2017 that a survey in 2007 by the Horizon Research Consultancy Group showed that at least 85 percent of CCP members had a religious inclination or were involved in religious activities, mostly involving Buddhism.

John said the CCP previously turned a blind eye to members having religious beliefs but the situation changed after President Xi Jinping took office. Suppression of religion has been continuing and party members' religious beliefs have been dealt with more severely.

"The newly revised regulations have already interfered with human rights and religious freedom, going beyond a political party's constitution," he said.

The revised 142-clause regulations contain over 19,000 words and are divided into three parts with 11 chapters, including general provisions, specific provisions and supplemental provisions.

They aim to fully implement Xi's socialist ideas with Chinese characteristics and the spirit of the 19th CCP National Congress to refine the party's constitution and affirm its code of conduct.