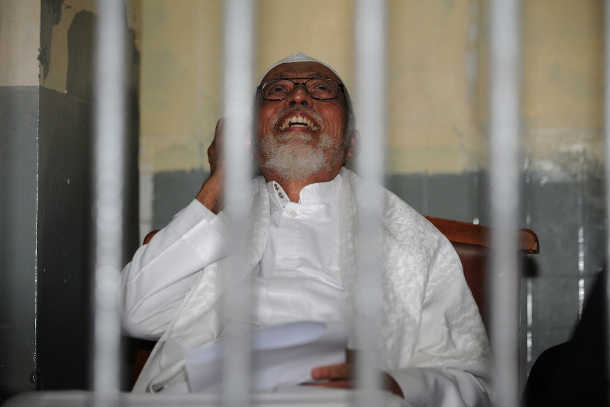 Radical Indonesian cleric Abu Bakar Bashir speaks on a mobile phone from the court detention cell before judges sentenced him to 15 years in this June, 2011 file photo. (Photo by Adek Berry/AFP)

Indonesian President Joko Widodo has approved the unconditional release of the terror network leader behind the 2002 Bali bombings.

Abu Bakar Ba'asyir, the spiritual leader of the Jemaah Islamiyah terror group is being released on compassionate grounds, according to government officials, however observers see a political motive behind his pardon.

Ba'asyir was sentenced to 15 years in 2011 for running a terrorist training camp in Aceh province, which was raided by security forces a year earlier.

Previously, the 80-year-old cleric served more than two years after being convicted in 2005 for his role in inspiring militants behind the Bali bombings that killed more than 200 people.

He is to be released this week pending administrative procedures, according to reports.

Widodo said the reason for Ba'asyir's release was because he was "old" and "in poor health."

However, political observers have questioned the move, as they see a possible link between Ba'asyir's release and the upcoming elections.

Widodo is up against long-time rival Prabowo Subianto in his bid to seek re-election as president in polls scheduled for April.

"This move is being seen by the public as political will, instead of goodwill. Why has this [pardon] been given directly ahead of the presidential election?" said Al Chaidar, a terrorism expert from Malikussaleh University in Aceh province.

"It looks as though the president's move is an attempt to win over more Muslim voters. We know the cleric is against the president," he told ucanews.com.

In security terms, Ba'asyir's release should have no impact as his influence in terrorism circles has waned.

Stanislaus Riyanta, a terrorism analyst at the University of Indonesia said the move is a slap in the face for survivors and families of terror attack victims.

"No wonder the public see this move as being politically motivated," he said.

"My father's health is deteriorating, and he can no longer serve his prison term," he told ucanews.com.

"The most important thing is humanity. It would be inhumane if he had to stay in prison. We hope he will be released soon," he said.