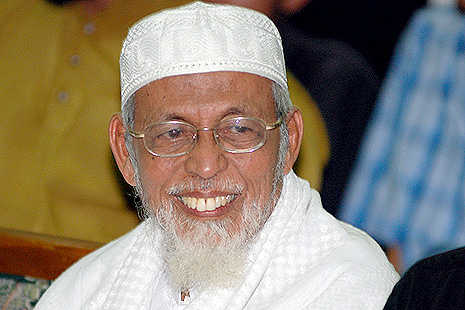 Hardline Muslim cleric Abu Bakar Ba’asyir was sentenced to 15 years by a Jakarta court yesterday for planning, helping and financing a terrorist training camp in Nanggroe Aceh Darussalam. “The defendant is legally proven to be convincing and encouraging others to use funds for criminal acts of terrorism,” said presiding judge Herry Swantoro. Ba’asyir was convicted of obtaining 350 million rupiah (US$41,176) from two donors and using the money to fund a terrorist training camp in Jantho, Aceh Besar district. The camp was raided by anti-terrorism forces in January 2010 Judge Swantoro said Ba’asyir stood in opposition against the government’s attempts to fight terrorism and once was sentenced for similar crime but repeated the offense. “[Ba’asyir] planned and/or encouraged others intentionally to use violence or threats to create terror and fear among people and cause massive casualties,” he said. Prosecutors had demanded a life sentence for Ba’asyir, who has been jailed and released on many occasions over the years. He previously served more than two years after a 2005 trial for helping inspire the militants behind the Bali bombings that killed more than 200 people. He has been widely believed to be the spiritual leader of the Jemaah Islamiah terror network, but was acquitted of involvement after a trial in 2003. Related report Seminar calls for law overhaul