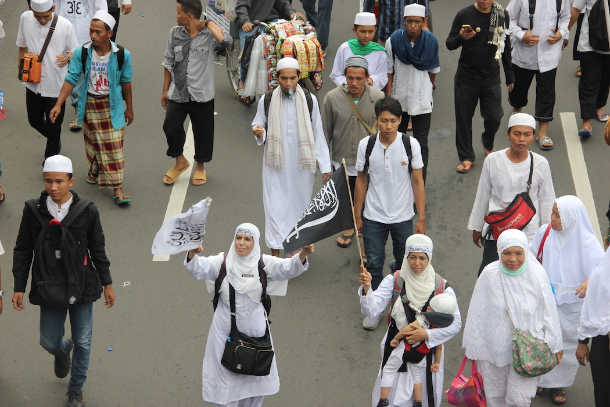 Islamic Defenders Front supporters  and other hard-line groups take part in a protest in this March 31, 2017 file photo, to demand then Jakarta governor Basuki Tjahaja Purnama be jailed for blasphemy. (Photo by Ryan Dagur/ucanews.com)

The groups, many of whom were behind rallies that ousted jailed former Jakarta governor Basuki Tjahaja Purnama last year, also pledged to mobilize all their networks to defeat Widodo, who they claim is hostile to Islam.

They included the Forum of Indonesia Muslims, 212 Alumni and the Islamic Defenders Front, all of which operate under an umbrella organization called the National Movement to Guard the Ulema Fatwa (GNPF).

They declared their backing for Subianto after he signed an "integrity pact" with the GNPF during a meeting on Sept. 16.

The pact contains 17 promises including one to uphold religious values, and another guaranteeing the safe return of one of the country's most controversial religious figures, Muhammad Rizieq Shihab.

Shihab, who heads the Islamic Defenders Front, is in Saudi Arabia after fleeing blasphemy charges brought by Christian groups.

Yusuf Muhammad Martak, the GNPF's chairman, said they would form a working group to garner support for Subianto.

In a video message Shihab urged his supporters to do all they can to ensure Subianto wins the presidency.

"I encourage the ulemas and da'i [preacher]) to make use of our Islamic schools and pulpits to garner enough support to win," he said.

"Let's continue our jihad in the social media, tirelessly and without fear. God will give us victory," he added.

Subianto thanked the groups and the firebrand cleric for their support.

"I promise that I will do what is best for the country," he said.

Amin is a respected cleric and former chairman of the Indonesia Ulema Council.

"He has a good relationship with ulemas," Raja Juli Antoni, a member of Widodo's campaign team told ucanews.com.

He said the GNPF is not backed by moderate Muslim groups, such Nahdatul Ulama and Muhammadiyah, which have millions of members.

A repeat of last year's Jakarta poll in which religious sentiment saw the defeat of Purnama, a Christian, was highly unlikely.

"The candidates are different, they are all Muslim so they cannot as effectively resort to religious issues," he said.