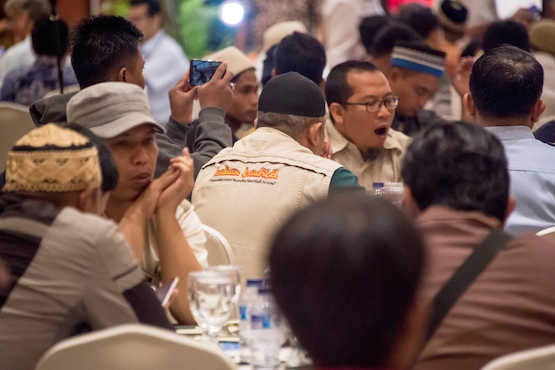 More than 100 convicted terrorists in Indonesia came face to face with terror attack survivors this week as part of a National Counter-terrorism Agency bid to foster reconciliation.

However, some terror attack survivors and relatives of people killed boycotted the Feb. 26-28 event in Jakarta, saying they were not psychologically ready to meet the former terrorists or that the attackers would benefit from the meeting more than they would.

The controversial government-sponsored gathering brought together 124 former terrorist prisoners with 51 survivors of terrorist attacks that included bombings in Bali and Jakarta.

Over the course of the three-day meeting, held in a Jakarta hotel ballroom, former terrorists and victims sat together and shared their experiences.

"This is the first event of its kind. We want to develop a spirit of reconciliation," counter terrorism agency chief, Suhardi Alius told ucanews.com on Feb 28.

He said all former terrorists rehabilitated by the agency have repented.

They were involved in various bomb attacks, including the 2004 Australian embassy and 2009 JW Marriot and Ritz-Carltonhotel bombings in Jakarta, as well as the 2002 Bali bombings in which more than 200 people died.

Mokhtar Daeng Lau, who bombed a McDonald's restaurant killing three people in Makassar, South Sulawesi on Dec.5, 2002 said the meeting was useful for him because it enabled him to better realize the consequences of what he did.

Lau was jailed for seven years and freed in 2010.

"I have repented and I will help the government educate others not to follow a radical path as I did," he told ucanews.com.

Sumarno, 40, who took part in the Bali bombings said the meeting helped him to respect people's differences.

"I deeply regret what I have done. I did not expect that so many victims were our brothers and sisters," said Sumarno, who teaches about Islam in Lamongan, East Java.

Chusnul Kotimah, a Bali bombings survivor, said she suffered greatly as a result of the attacks but said she had forgiven the attackers.

She also took the opportunity at the meeting to call on the government to do more to help victims and their families.

Denny Wahyu, a policeman injured in an attack on a Jakarta department store in January 2016, said the meeting helped heal some psychological wounds.

"I have no grudge against them. I only hope they spread tolerance to their friends who now follow the path radicalism and terrorism," he said.

The anti-terror agency has built Islamic boarding schools for terrorist's children in Medan, North Sumatra and Lamongan in East Java to prevent their children from following in their parents' footsteps.

He called on the government to pay more attention to former terrorists and their families "so that they are not marginalized and do not return to the wrong path."

"All have suffered not only psychologically but also economically. All are included in ministry aid packages," he said.