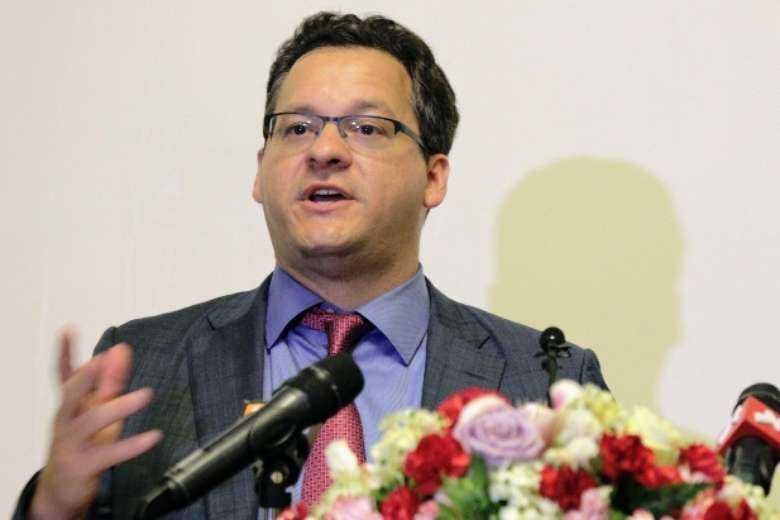 US human rights lawyer Jared Genser speaks at a press conference in the Maldives on Sept. 10, 2015. (Photo: AFP)

A United States lawyer representing Theary Seng, a high-profile political activist on trial for treason in Phnom Penh, has been barred from entering Cambodia.

General Khieu Sopheak, spokesperson for the Ministry of Interior, told the government-friendly Fresh News service that human rights lawyer Jared Genser had been permanently banned from entering Cambodia for violating the terms of his tourist visa.

“Apart from violating Cambodian jurisdiction with the purpose to threaten the independence of the Cambodian judiciary, an American person named Jared Matthew Genser violated the immigration law by using a visa for a different purpose,” Khieu Sopheak added.

Khieu Sopheak said that after arriving in Cambodia, Genser had presented himself as an international lawyer, attended the trial and gave a press conference in front of Phnom Penh Municipal Court.

Theary Seng, who also edits the Bible in the Khmer language, was charged with treason in November 2020 amid a government crackdown on supporters of the outlawed Cambodian National Rescue Party (CNRP).

Her trial was delayed due to the Covid-19 pandemic and resumed in early December with Genser, a classmate of Theary Seng at the University of Michigan Law School, attending.

This doesn’t demonstrate strength on the part of Prime Minister Hun Sen, it demonstrates weakness

Genser, known as “the extractor” for his ability to free political prisoners, called on Cambodian authorities to end all mass trials targeting critics and opponents of Prime Minister Hun Sen and his government.

“This doesn’t demonstrate strength on the part of Prime Minister Hun Sen, it demonstrates weakness,” Genser said, referring to the treason charges against Theary Seng.

Genser, currently an adjunct professor of law at Georgetown University Law Center, also served as international counsel to Aung San Suu Kyi between 2006 and 2010 when the Nobel laureate was held under house arrest by the then military government in Myanmar.

Theary Seng — a Cambodian-American — recently appeared in court with her head shaved, which she said was done to mourn the loss of Sin Khon, a CNRP youth activist who was murdered by a group of men armed with knives two months ago.

She is among 139 people who are being tried in two batches of 42 and 97 and face up to 12 years in prison if convicted on charges of treason and incitement which pro-democracy advocates and rights groups have condemned as politically motivated.

She was initially involved with the “nine fingers” campaign, a gesture which represented Nov. 9, 2019, the day CNRP leader-in-exile Sam Rainsy had promised to return from self-exile in France. It became a popular salute among his supporters in Cambodia.

The return was thwarted after international airlines barred Sam Rainsy from boarding.

Last March, Sam Rainsy was slapped with a 25-year jail term for an alleged plot to overthrow the government. He now faces a total of 42 years in prison following six convictions, while a further eight charges are still to be heard.

The World Justice Project ranked Cambodia second from the bottom among 139 countries in its Rule of Law Index 2021.