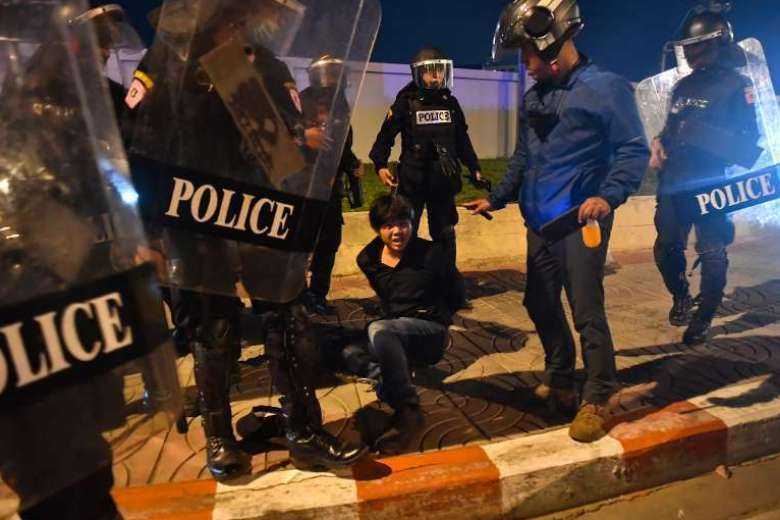 Police detain a pro-democracy protester during a demonstration headed towards the residence of Thai Prime Minister Prayut Chan-o-cha in Bangkok on Feb. 28. (Photo: AFP)

Thailand’s National Broadcasting and Telecommunications Commission (NBTC) has told media outlets to stop reporting on pro-democracy activists calling for reform of the monarchy.

NBTC commissioner Lt. Gen. Perapong Manakit told media outlets to desist from interviewing protest leaders or anyone who agreed with their demands for a need to reform the monarchy.

The warning, deemed ominous for further restraining freedom of speech in the Southeast Asian country, comes in the wake of the Constitutional Court declaring any criticism or comments on the monarchy as amounting to treason.

“The effect has been chilling. We’ve had to walk on eggshells [in our reporting of the pro-democracy protests] over the past year and now we’ll have to walk on eggshells and thin ice,” an editor of an English-language publication in Bangkok told UCA News on condition of anonymity.

Although the regulating body said journalists working in Thailand remained free to report on pro-democracy protests, it warned them that coverage of protesters’ calls for monarchy reforms could be viewed as repeating the offense and result in the prosecution of journalists and media outlets.

A draconian royal defamation law criminalizes any criticism of the royals or the institution of monarchy in general in a country where the royal family is officially held up as a paragon of virtue and selflessness.

This is the dawn of a new dark age in Thailand. Just having the wrong [political] opinion makes you an enemy of the state

The latest restraints on political reporting may cause media outlets to self-censor regarding demands voiced by pro-democracy activists who see the monarchy as an ossified institution that is out of step with 21st-century norms.

Thai media outlets have generally been extremely cautious in reporting on demonstrators’ demands ever since youth-led street protests against the government of Prime Minister Prayut Chan-o-cha erupted in July last year.

According to Thai Lawyers for Human Rights, at least 155 activists, including numerous minors, have been charged with royal defamation, a crime punishable with up to 15 years in prison per count.

Some protest leaders, who are currently in prison ahead of their trials, have been charged numerous times for their various statements, which means they could potentially be sentenced to decades-long or even centuries-long prison terms.

“This is the dawn of a new dark age in Thailand,” a pro-democracy activist told UCA News. “Just having the wrong [political] opinion makes you an enemy of the state.”

Not even foreigners living in Thailand are exempt from legal action if they voice opinions in support of pro-democracy activists and their demands.

Late last week, the Thai Immigration Department issued an expulsion order to Yan Marchal, a French entrepreneur who runs a game development company and has lived in Thailand for 18 years, saying that he posed “a danger to society” because of his political views.

Marchal has been outspoken on social media in his support of youth-led pro-democracy demonstrations and the calls of activists for political reforms in a country ruled by a military-allied government which seized power in a coup in 2014 after ousting a democratically elected government.

In quirky and sarcastic videos on YouTube and TikTok, the Frenchmen took a dig at the country’s monarchy and government, which was likely to have led to his expulsion.

“As many of you know by now, I have been denied entry to Thailand and sent back to France, merely because the powers in place do not like what I post on social media,” Marchal posted on Facebook on Nov. 28 shortly after he was refused entry to Thailand on his way back from France and deported.

“I may be the first known case of deportation from Thailand without any conviction or visa overstay,” said the Frenchman, who has children in Thailand.

“Obviously, being deported to a place where Thai speech laws do not apply will not prevent me from posting more content,” he added.