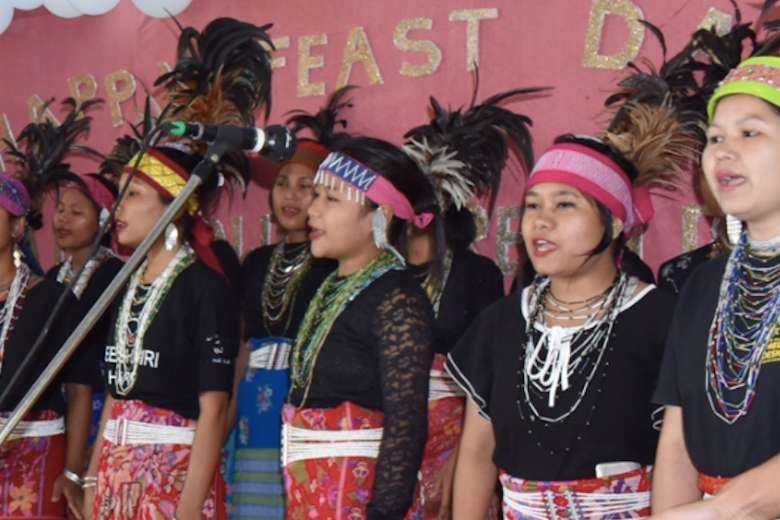 Students of Loyola College in the Williamnagar area of India's Meghalaya state singing at a program. Jesuits' plan to expand their college in the state's Umoid village was halted following a violent incident on Feb. 24.  (Photo: loyolacollegewn.edu.in)

Local people are guarding a Jesuit mission house in India’s Meghalaya state after an attack on migrant workers on its campus killed one person and injured seven.

“We are still not sure why such a bloody attack was unleashed on the migrant workers,” said Father Paul Coelho, the college principal.

Father Coelho said eight workers from neighboring Assam state came with necessary permits to work in the mission on Feb. 19. They were engaged in constructing the administrative block and hostel building for girls.

On Feb. 24 night, 20-25 masked men forced their way into the classrooms and attacked the sleeping workers with wooden rods and sharp weapons, injuring them all.

One succumbed to his injuries on way to hospital and others are recuperating in hospital.

Father Coelho said the mission has “no enemies” and “local people are very happy with our work. We are at a loss to explain how such a deadly attack took place on our school campus,” he told UCA News on March 1.

“The local people rallied behind us and have agreed to maintain a vigil to protect our institution. No police personnel have been deputed to guard the institution,” the priest said.

On Feb. 28, local people held a peace rally and expressed their support for the Jesuit mission.

Tribal-dominated Meghalaya frequently witnesses ethnic violence as local people resist people from Assam coming to their state, which they say disturbs their demographics.

Ethnic violence last March claimed at least three lives after a Khasi tribal man was killed in a clash with members of the powerful Khasi Students’ Union (KSU) in a border village.

G.K. Iangrai, assistant inspector general of police, told local media that two of the arrested are KSU members, but police said they could not establish the motive behind the violence.

Archbishop Victor Lyngdoh of Shillong based in the state capital told UCA News that the “government and local administration handled the situation very well … to ensure peace in the area.”

He said the violence seems to be stemming from local people's fear of losing their employment opportunities.

Meghalaya is a Christian-dominated state in which some 75 percent of its 2.6 million people Christians.