Three people, including two Hindu priests, were beaten to death on a public road in a mob attack in a western Indian state, sparking widespread condemnation including from the Catholic Church.

Indian media on April 20 showed a video of a mob beating some people and said the villagers of Gadchindhali in Maharashtra's Palghar district suspected them to be child smugglers.The three “were brought to the hospital in the wee hours of April 17 and were declared dead,” Maharashtra's Chief Minister Uddhav Thackeray told media on April 20 after the video went viral on social media.
Donate to UCA News with a monthly contribution of your choice
He named the victims as Swami Kalpvruksha Giri, Swami Sushil Giri and their driver Nilesh Telgade. They were traveling from state capital Mumbai to nearby Gujarat state when they were attacked on April 16 at night.“It is an unfortunate incident. We are shocked and saddened,” said Archbishop Felix Anthony Machado, the newly appointed secretary-general of the Catholic Bishops' Conference of India.The prelate heads Vasai Diocese, under which the incident took place. “Such violence cannot be justified in any manner in a civilized society,” he said.The video shows a mob beating a man lying on the road with sticks even as he pleads for mercy with folded hands. It also shows a policeman trying to move the attackers away.State police have arrested more than 100 people linking them with the lynching. They have also suspended two policemen for dereliction of duty.The victims were on their way to Surat city to attend the funeral of someone close to them. Police stopped them on the main road and sent them back to Mumbai as they were not supposed to travel during the Covid-19 lockdown that is due to end on May 3.After they took an interior road through Gadchindhali, villagers stopped them and suspected them to be a gang of thieves stealing children, the chief minister said.
Related News 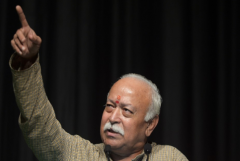 Thackeray reiterated that the violence had no Hindu-Muslim angle but was “the result of a sheer misunderstanding.” It should not be projected as sectarian violence targeting any particular religion, he said.

Archbishop Machado cautioned social media users against causing “any communal flare-up through unwarranted posts” as violence will not solve any issue.The violence triggered angry reactions from sociocultural leaders.Anurag Kashyap, a noted film director, appealed on his Twitter page not to search for Hindu-Muslim angles in the case. "Read the report. Nearly 100 people have been arrested. I will condemn those who were in that crowd, but more than that I will condemn the atmosphere which has been created in this country, which is a direct result of this,” he wrote. Mob lynching is not new in India as published reports show that at least 44 people have been killed in cow vigilante attacks since 2015 in over 80 incidents. At least 36 of the dead victims were Muslims, but they also included socially poor Dalit Hindus and tribal Christians.The Supreme Court in 2018 called on the federal government to enact new laws to help curb lynching, but the federal government led by the pro-Hindu Bharatiya Janata Party (BJP) has yet to act on the issue.
Support our Catholic journalism with a contribution of any size
Your contribution will help the Catholic journalists and editors in UCA News to report news, features, commentaries, video stories and podcasts on issues affecting the lives of millions of Catholics around the world.
Here is a gift of two valuable books as a token of appreciation to you.
Check your mailbox for links to these PDF/e-Books.