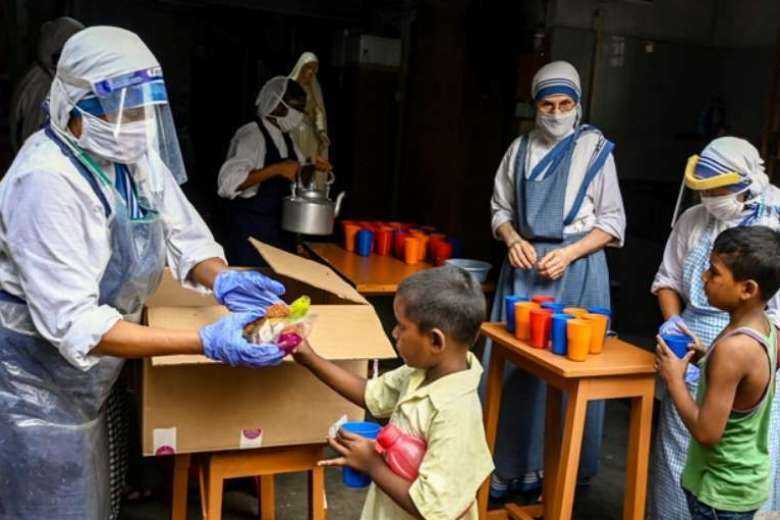 Nuns from Missionaries of Charity distribute food to the needy on Peace Day to mark the death anniversary of founder Mother Teresa at the Mother House in Kolkata on Sept. 5. (Photo: AFP)

Missionaries of Charity (MC) nuns accused of attempting to convert girl inmates at a shelter home in Vadodara city in the western Indian state of Gujarat will be hoping for protection from likely arrest when a local court hears their plea on Jan. 19.

The two nuns, who did not want to be named, had filed for anticipatory bail after police initiated a probe on Dec. 13 following a complaint of a violation of the Gujarat Freedom of Religion Act 2003, a law that curbs religious conversion through allurement, force and coercion, at the MC-run Nirmala Shishu Bhavan.

The complaint was registered by Mayank Trivedi, a district social defense officer who claimed to have visited the shelter home on Dec. 9. The inmates were made to wear a cross around their necks and keep the Bible in a storeroom they used regularly, he alleged.

These actions, according to the complainant, hurt the religious sentiments of Hindus.

The court had restrained the police from arresting the nuns until Jan. 10 but has yet to decide their plea for anticipatory bail.

Father Cedric Prakash, a Jesuit priest and rights activist based in Gujarat, said there was no case against the nuns. “It is an attempt to harass them and tarnish the image of an institution that is serving the poorest of the poor and those abandoned by society,” he told UCA News on Jan. 15.

Church leaders feel the case against the MC nuns was part of a larger conspiracy to defame the internationally acclaimed congregation founded by St. Mother Teresa

The Jesuit priest said that having a textbook in one’s possession or sharing it with someone for reading is not a crime and hoped that the court will uphold the Indian constitution and the law of the land to ensure justice.

The shelter home in Vadodara has 48 inmates including 22 mentally and physically challenged girls.

Church leaders feel the case against the MC nuns was part of a larger conspiracy to defame the internationally acclaimed congregation founded by St. Mother Teresa.

News of the federal government refusing to renew the MC congregation’s license for receiving and utilizing foreign funds citing “adverse inputs” broke on Christmas Day, causing public uproar across the country. The authorities, however, restored the license on Jan. 8.