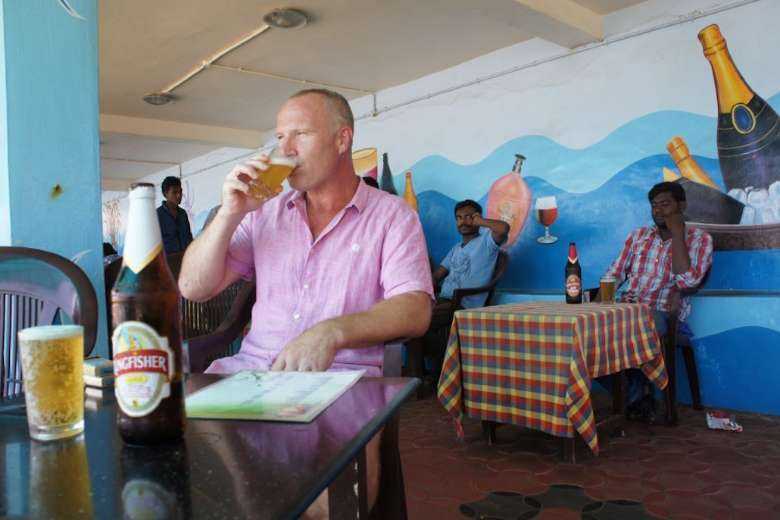 A tourist drinks a beer at a restaurant in the resort town of Kovalam in India's Kerala state. (Photo: AFP)

Catholic bishops including a cardinal in southern India’s Kerala state have joined a public protest against the communist-led state government’s policy of increasing the availability of alcohol.

Cardinal Baselios Cleemis, head of the Eastern-rite Syro-Malankara Catholic Church, urged the Kerala government to limit the availability of liquor that is "destroying the life of the common man."

The Left Democratic Front (LDF) government recently announced it was amending the state’s liquor policy to open more liquor shops and make it easily available to people in a clear shift from the 2014 policy of total prohibition.

The Congress-led United Democratic Front (UDF) government in 2014 laid out a 10-year plan to make Kerala an alcohol-free state by the phased closing of liquor shops. Only five-star hotels were granted liquor licenses after church groups and others opposed to alcohol consumption argued that poor people were the worst victims of alcoholism.

The LDF government that came to power in 2016, however, insisted on increasing the availability of liquor and is now looking into an option to brew liquor from tapioca, a tropical root that is a staple food in Kerala.

Though the government has not made much progress with this proposal, Cardinal Cleemis is opposed to any move that would increase the cost of tapioca.

We do not appreciate the government diluting its liquor policy to increase the supply of alcohol. Why should the government go for such a policy that is damaging the health of people?

He told India’s only communist-led government that “all attractive things are not useful for life.” The Church would only support policies that augment the economy of the state and its people, he added.

Cardinal Cleemis questioned the government’s new liquor policy while inaugurating a day-long protest in front of the Kerala secretariat on March 15 organized by a people’s movement against liquor. The protesters insist on total prohibition.

However, LDF convener A. Vijayaraghavan on March 15 hinted that the Kerala government is considering revamping the state's liquor policy.

The government aspired to make it less restrictive by whittling down the number of dry days and paving the way for youthful pub culture, as seen in IT hubs among others to woo global companies and private investors, the leftist leader said.

Archbishop Maria Callist Soosa Pakiam of the Latin-rite Archdiocese of Trivandrum said that when the communist government came to power in 2016, there were only 29 bars in Kerala but now 859 bars are operational.

According to a recent report by the National Family Health Survey, Kerala tops the list of Indian states with the highest levels of alcohol consumption

Besides them, more than 270 outlets of Kerala State Beverages Corporation, the government outlet that sells hard liquor, and over 4,000 toddy shops are distributing booze in the state, the prelate added.

“We do not appreciate the government diluting its liquor policy to increase the supply of alcohol,” Archbishop Pakiam told UCA News on March 16. “Why should the government go for such a policy that is damaging the health of people?”

Bishop Joshua Mar Ignathios of the Syro-Malankara Church said liquor consumption in the state has increased markedly along with the use of other drugs. He urged the government to conduct a study on the issue.

According to a recent report by the National Family Health Survey, Kerala tops the list of Indian states with the highest levels of alcohol consumption. The survey found that 18.7 percent of men in rural areas and 21 percent of men in cities consume alcohol in Kerala. The national average of alcohol users above 15 years among men is 18.8 percent, but in Kerala it is 19.9 percent.

The Catholic Church has been constantly battling for prohibition with successive Kerala governments. Christians make up close to 19 percent of the state’s 33 million population, with Muslims 26 percent and Hindus 54 percent.