Chhattisgarh state, ruled by the Congress party, has reported a spate of attacks on the minority community 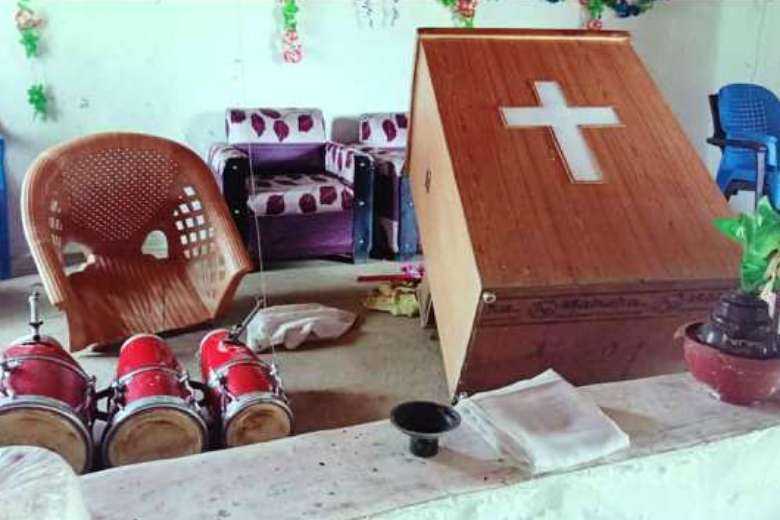 A prayer house vandalized in an attack by alleged Hindu activists in Kawardha in the Indian state of Chhattisgarh on Aug. 29, 2021. (Photo: UCA News)

A Christian leader in the central Indian state of Chhattisgarh has squarely blamed the provincial government for failing to check attacks on the minority community after a spate of recent incidents.

“Reports of Christian persecution are nothing new in this part of the country, which is very unfortunate. More than 10 attacks targeting Christians were reported from five different places during the past two weeks. It is a complete failure of the state government,” Arun Pannalal, president of Chhattisgarh’s Christian Forum, told UCA News.

He said more than 200 incidents were documented in the past two years, the latest one on Jan. 9.

More than 200 Hindu activists allegedly entered a pastor’s house during a prayer service and beat up the faithful in remote Odagoan village in Kondagaon district, reported International Christian Concern (ICC), a persecution watchdog.

The pastor and another Christian man were hospitalized while five Christian families fled the village fearing for their lives.

“Hindu activists were threatening and manhandling Christian faithful by making false claims about their involvement in religious conversion activities when it is they who force the poor tribal people to embrace Hinduism,” Pannalal alleged.

The predominantly tribal people in the state are simple and peace-loving. Some vested interests are out to destroy social harmony and political stability

Chhattisgarh is ruled by a Congress party government that swears by the Indian constitution and its secular, democratic values. But its inaction when it comes to the systematic targeting of Christians in the state shows it in poor light, he said.

Sunil Minj, an activist based in state capital Raipur, said the government’s failure had left the faithful insecure and vulnerable. “The predominantly tribal people in the state are simple and peace-loving. Some vested interests are out to destroy social harmony and political stability in the state,” he added.

ICC quoted Pastor Hemanth Kandapan on the Odagaon incident as saying “one Hindu activist named Sanjith Ng broke into the worship service and started manhandling members of the congregation and me. Ng dragged me out of the house where a mob of more than 200 had gathered.”

The mob assaulted Pastor Kandapan and a faithful named Sankar Salam. Both suffered severe injuries and had to be hospitalized.

Pastor Kandapan said the Hindu activists alleged they were illegally converting Hindus to Christianity and threatened to kill them if they continued to hold prayers in the village.

“I was hackled and abused by the mob even in the presence of the police and kept under house arrest for nearly nine hours,” Pastor Kandapan was quoted as saying in the ICC report.

The Congress party has been in power in the state for the past three years. Chhattisgarh was previously ruled by the pro-Hindu Bharatiya Janata Party which framed an anti-conversion legislation, the Chhattisgarh Freedom of Religion (Amendment) Act, 2006, to criminalize religious conversion by any illegal means.

A person is required by law to seek prior permission from the district magistrate at least 30 days in advance before changing religion. Failure to comply may lead to legal prosecution and imprisonment for up to three years.

Chhattisgarh is India’s most densely Hindu state with 98.3 percent of its 23 million people professing Hinduism. Muslims account for one percent while Christians, mostly tribal people, account for only 0.7 percent.