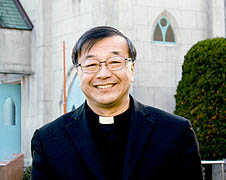 Father Satoru Kato, 56, until recently an Anglican priest working in England, is set to enter full communion with the Catholic Church and be ordained a Catholic priest. According to Father Hiroshi Oka of the Saitama diocese, who has been helping coordinate the convert’s entry into that diocese, once he is ordained Kato will work at a welfare institute and parishes as an assistant priest in Gunma Prefecture. Since Christmas, he has been doing interim work in Gunma. Since Kato is married, Oka began to educate lay Catholics last December, explaining that priests are frequently married in Eastern Rite communities of the Catholic Church. “At first, there was a general feeling of displeasure among the laity,” Oka explained, “but I think that has mostly dissipated.” Kato, who studied Buddhism in Japan, was baptized in a Protestant Church, but received instruction about liturgy from a Jesuit priest. Later, he went to England and studied sacramental and liturgical theology, again with Jesuits. But because, among other things, he was already married, he felt called to the Anglican priesthood and was so ordained. “I served a particularly Catholic tradition, the so called Anglo-Catholic tradition, within the Anglican Church,” he explained. All the while, Kato, like many of his ecclesiastical colleagues, suffered pain and sadness at the Anglican Church’s separation from the Catholic Church. In particular, the row over the ordination of women as priests in the Anglican Communion led him to a tipping point. “Concerning ordination and all of the sacraments, I stand with Rome; and now I have a new prayer: that I might live and die as a member of the worldwide Catholic Church,” he said. Bishop Daiji Tani of Saitama is awaiting permission from Rome to ordain Kato in the near future. One condition of the ordination will be that Father Kato will not become a pastor. “With the support of Bishop Tani, I will be allowed to return to communion with the pope. At last my spirit can be at ease,” said Father Kato. Toshiyasu Takei, 64, a lay leader in the diocese who is helping with the ordination plans, recalled his own surprise upon hearing of Kato’s case. “I had heard the news (that an Anglican priest was converting), but I thought it was a story about England. I never thought he would be coming to my own diocese!” Oka has made a special request for Takei to take into account when planning the ordination: “Please don’t forget to set aside a moment for Father Kato’s wife to offer her own greetings!” JA13028.1638