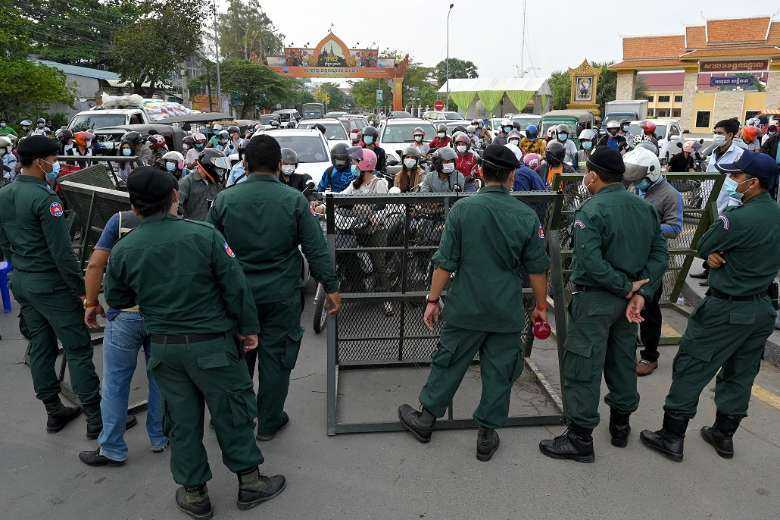 Police block motorists from passing a checkpoint in Phnom Penh on April 15 as Prime Minister Hun Sen warned that the country was on the brink of death amid its worst coronavirus outbreak. (Photo: AFP)

The number of confirmed Covid-19 cases is continuing to climb in Cambodia, claiming the life of a storied filmmaker who became a senior minister after the capital was locked down in the latest dramatic moves to curb the spread of the contagion.

Government-friendly media reported that Mao Ayuth, secretary of state for the Information Ministry, had died of Covid-19 at the Khmer-Soviet Friendship Hospital on April 15 evening.

The 77-year-old directed the films The Crocodile in 2003 and Luong Preah Sdech Korn in 2016. His death was one of three reported overnight, taking the country’s death toll to 38.

All have been recorded since the February 20 Community Event, a local term for this country’s third — and by far the most damaging — outbreak, with total confirmed cases now standing at almost 5,500 with hundreds more being reported each day.

Nearly all Covid-19 cases recorded since Feb. 20 were diagnosed as the UK variant. Prior to the outbreak, Cambodia had emerged relatively unscathed from the pandemic, recording just 484 cases in its first year.

In response to the spiraling numbers, Prime Minister Hun Sen has closed all provincial borders and told all people to remain in their homes over Khmer New Year with a nighttime curfew imposed on Phnom Penh as well as the lockdown.

The authorities have told them not to raise prices, but they do

This has caused some panic buying and price gouging among the few markets allowed to remain open to ensure food supplies.

“Prices in the local markets are now very high,” said one Cambodian woman. “We do not have much and cannot afford this. The authorities have told them not to raise prices, but they do.”

Most of the outbreaks are being reported from markets and factories, with police conducting block-to-block searches for people who have tested positive but then dodged health authorities.,

Prime Minister Hun Sen has imposed hefty prison terms of up to 20 years for people who breach quarantine or fail to follow health rules, raising concerns among human rights groups who say they are too severe.

However, Hun Sen said the priority was to save lives, adding Cambodia was “on the brink of death” while pleading with Cambodians in a national address to work together.

“Please, my people, make a joint effort to end this dangerous event. We are on the brink of death already,” he said. “If we don't join hands and work together, we will head into a real death.”

Siem Reap and the famed temples at Angkor Wat have also been closed to foreign tourists.

Officials said the archeological site, often ranked as the world’s number one tourist attraction, will be off limits to foreigners at least until the fourth quarter of this year.