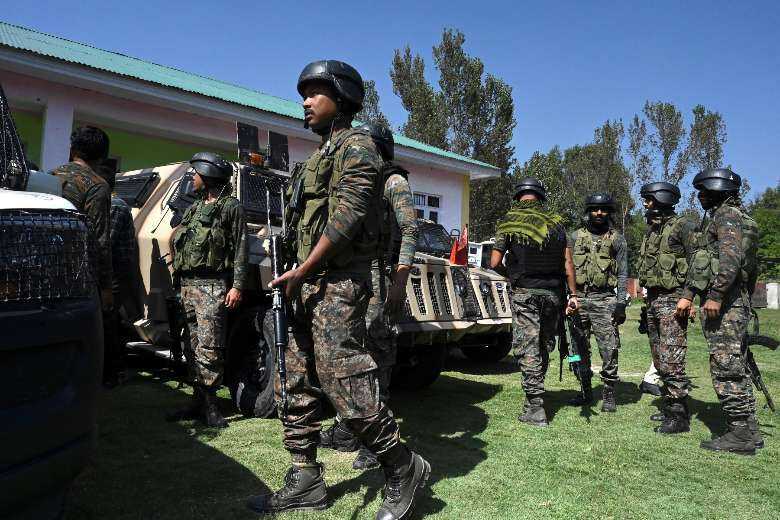 As Prime Minister Narendra Modi set out his Taliban worries to world leaders this week, Indian forces staged raids and battled Kashmir militants who he fears could be emboldened by the Islamists' victory in Afghanistan.

Kashmir rebel shootings of civilians and police, raids by the security forces on militant hideouts, and insurgent infiltrations across the India-Pakistan ceasefire line have all increased in the Muslim-majority region since the Taliban overran Kabul on Aug. 15.

About 40 people have been killed in shootings and clashes in the two months since then in the Himalayan region, which has been divided since India and Pakistan became independent in 1947.

Militants have targeted minority Hindu and Sikh civilians, while gun battles near the ceasefire line have also left soldiers and rebels dead.

India has not openly blamed the Taliban takeover for the uptick in violence, but it has intensified patrols near Pakistani Kashmir and fortified some army camps, according to residents and security officials who spoke to AFP on condition of anonymity.

Modi told a G20 summit in Rome this week that international efforts were needed to make sure Afghanistan does not become a safe haven for "radicalisation and terrorism". He has also raised India's concerns with US President Joe Biden.

India worries that weapons and fighters could again reach the region, over which it has fought two wars against Pakistan

In September, he told the UN General Assembly that no country must be allowed to use Afghanistan "as a tool for its own selfish interests" — a comment widely seen as a reference to neighboring Pakistan, the chief backer of the Taliban's 1996-2001 regime.

This time Islamabad has stopped short of recognising the new Taliban government. Still, New Delhi accuses its arch-rival in Islamabad of fueling Pakistan-based militant groups Lashkar-e-Taiba and Jaish-e-Mohammad, which are blamed for many attacks in Kashmir. Pakistan denies the claim.

India was a backer of the Soviet-puppet government in Kabul that was overthrown by mujahideen forces in 1992.

In 2001 it helped the US-led forces that toppled the Taliban. And it was a major donor to the government that the hardline Islamists crushed in August.

Afghan militants fought alongside Kashmir fighters in the 1980s and 1990s. About 20 Afghan "guest mujahideen" were killed and 10 were captured, according to a former Kashmiri fighter.

India worries that weapons and fighters could again reach the region, over which it has fought two wars against Pakistan.

"What we can say and learn from the past is that when the previous Taliban regime was in power, that time definitely we had foreign terrorists of Afghan origin in Jammu and Kashmir," said India's military chief of staff General M.M. Naravane. "So there are reasons to believe that the same thing might happen once again."

Protests are virtually impossible in Kashmir because of restrictions imposed by Delhi since the region's semi-autonomous status was revoked in 2019.

But some in Kashmir have quietly welcomed the Taliban takeover of Afghanistan as a victory against the odds that they too can aspire to one day.

"If they can defeat the world's largest military power, we see a possibility that we too can win our freedom," one businessman in the main Kashmir city of Srinagar told AFP.

A former Kashmir militant who trained in Afghanistan in the 1990s and fought alongside Afghan mujahideen in Kashmir added: "The Taliban victory has already supplied oxygen to our movement."

The Taliban itself won't agitate for unrest in Kashmir, but those it is aligned with likely will do so

Given India's security clampdown on Kashmir, Naravane and other military chiefs are confident that Delhi can cope with any surge.

But speaking on condition of anonymity, a senior security official in Kashmir said "there is some panic" inside the security establishment.

Taliban officials have said they want to maintain trade and other ties with India, meaning that some kind of contact will have to be maintained.

"The Taliban itself won't agitate for unrest in Kashmir, but those it is aligned with likely will do so," he said.

Mosharraf Zaidi, a columnist and security analyst in Pakistan, said he saw no reason the Taliban would want to "deliberately agitate the Indian authorities".

Their victory, he believes, is more important for the signal it sends to "young Kashmiri boys and girls watching the images from Afghanistan".