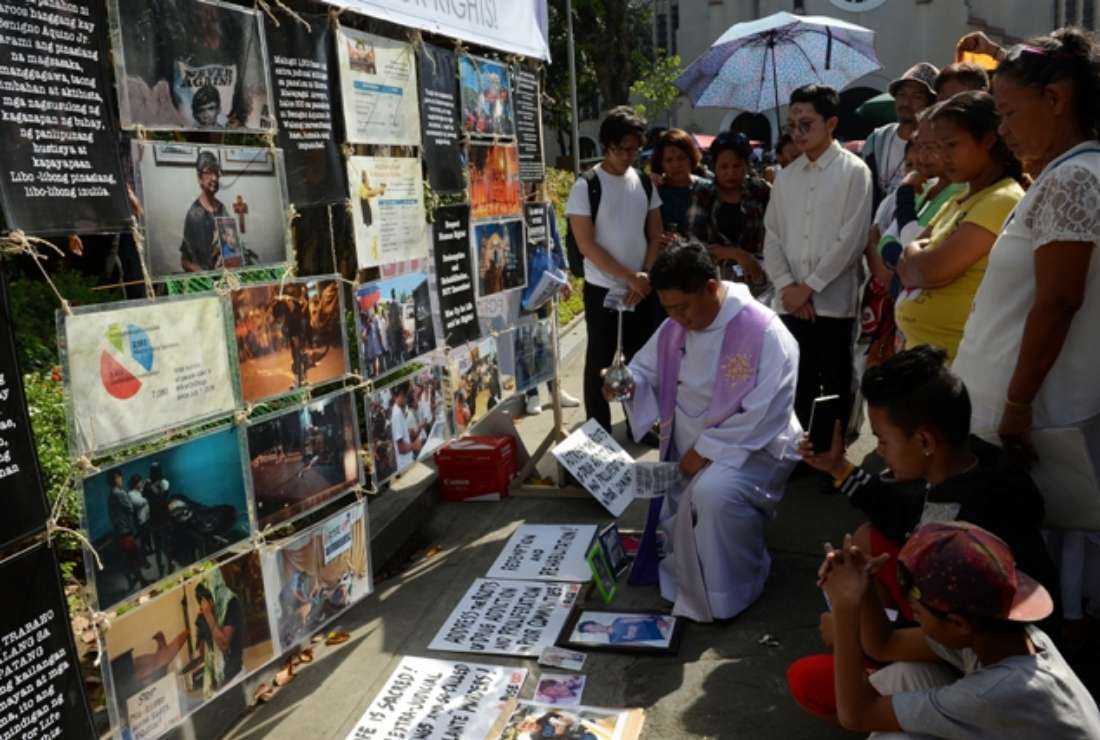 A priest blesses photos of victims of extra-judicial killings in President Rodrigo Duterte's drug war during a gathering on the grounds of a church in Manila on March 1, 2017. (Photo: AFP)

The Catholic Social Action Group in Legaspi diocese in Albay province, Bicol region, together with left-wing Akbayan, on Aug. 10 criticized newly installed police chief General Rodolfo Azurin for being a “puppet” of the former administration.

“The Chief of Police’s statement that he would continue the war on drugs is the preamble of the drug war policy of President [Ferdinand] Marcos. He is no different from President Duterte who has allegedly killed an average of 30,000 individuals without giving them due process of law,” the social action group told UCA News.

Gen. Azurin said he would sustain the war on drugs because he realized its value and significance in safeguarding the public from criminals.

“I emphasize that our war on drugs shall be relentlessly continued regardless of who gets hurt and who gets caught. We have already ripped the benefits of having a peaceful, more orderly society because of it… so we must sustain it,” Azurin told his fellow policemen on Aug. 4 at Camp Crame in Quezon City, Manila.

The Filipino general also said he would expand the partnership of the police force with other government agencies to ensure that the supply chain of illegal drugs would be reduced if not cut.

“We will intensify our efforts and our coordination with other government agencies like the Bureau of Customs and the Department of Justice, among others. We need the helping hand of other agencies in the government if we want to combat this great enemy,” Azurin added.

Akbayan group, however, said Azurin’s policy, which reflected the stand of President Marcos, should not surprise human rights advocates because it was part of the political deal or agreement of the Marcoses and the Dutertes when they merged in the political arena for the May polls.

“Why are we surprised? We should not be. This is part of the deal when former Davao City Mayor, now Vice President Sara Duterte agreed to run with former lawmaker, now President Ferdinand “Bongbong” Marcos. They need to protect each other, particularly in human rights violations. Isn’t this clear?” Akbayan member Cynthia De Castro told UCA News.

De Castro said Marcos’ protection of Duterte would not only extend to his drug war campaign but shield him from any liability arising therefrom.

“The Duterte-Marcos tandem in the last election should tell us a lot. It was more than for election purposes. It is to protect two political clans from any accountability while they were in public office,” De Castro added.

On Aug. 2, President Marcos stirred world criticism by announcing that the Philippines would not rejoin the International Criminal Court (ICC) saying the country’s domestic courts have been working.

“No, the Philippines has no intention of rejoining the ICC. We’re saying that there is already an investigation going on here and it’s continuing, so why would there be one like that in the ICC?,” Marcos told reporters on Aug. 4.

“We have a functioning judiciary, and that’s why I don’t see the need for a foreigner to come and do the job for us. Our judicial system is perfectly capable of doing that,” he added.

Human rights advocate and staunch Duterte critic Father Flavie Villanueva said Marcos’ statement showed he was afraid that the ICC would not only find out Duterte’s human rights violations but also his family’s.

“Why is he afraid of the ICC investigation if he has nothing to hide? He thinks that Philippine courts are competent but we all know how the president could exert influence in our justice system,” Father Villanueva told UCA News.