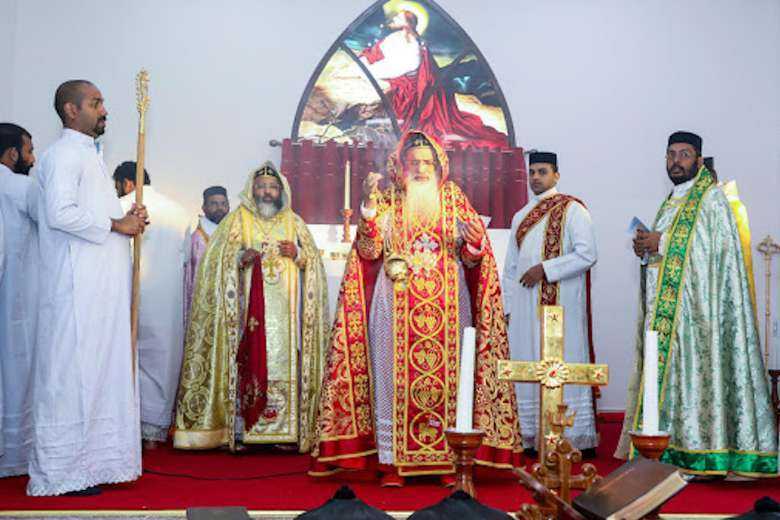 A Mass in the Orthodox Syrian Church of Kerala. A factional fight continues between them and the rival Jacobite Church, forcing the state's communist chief minister to seek the suggestion of other Christian churches to end the century-old dispute. (Photo: Wikipedia)

Kerala's communist chief minister has sought suggestions from heads of Christian denominations to find peace among two warring factions of Christians in the southern Indian state.

Vijayan spent an hour on Dec. 21 discussing the issue with Cardinal George Alencherry, head of the Syro-Malabar Church, Cardinal Baselios Cleemis, head of the Syro-Malankara Church, Bishop Joseph Kariyil, president of the Latin bishops' forum, Bishop Oommen George of the Church of South India and a few other leaders.

The factionalism in the indigenous Malankara Church, a branch of the Syrian Orthodox Church of Antioch, has been raging since 1911, when they split into Orthodox and Jacobite groups.

The Orthodox faction has its supreme head based in Kerala, while Jacobites owe allegiance to Antioch's Patriarch. The dispute over their common heritage of vast landed properties and churches continues to trouble the state as the factions occasionally engage in street fights.

After years of legal wrangling, India's Supreme Court in 2017 ordered that more than 1,100 churches in possession of the Jacobite faction be handed over to the Orthodox faction. But massive resistance and violence followed when the state government took steps to implement the order.

Although they lost the case, Jacobites claim they are a numerical majority in most places and will not part with the land, churches and cemeteries. Orthodox followers insist they have the legal claim over the properties and the state should protect their rights.

"We definitely want to see a peaceful settlement to the dispute," Bishop Kariyil told UCA News on Dec. 22.

"It is true the court order favored one, but that does not mean that others should be deprived of their right to worship in churches."

The Christian leaders suggested the government implement a policy based on the majority opinion in each disputed church.

"We have suggested allowing any faction that has the support of 75 percent or more in a parish should be allowed to retain the church, and others should also be given space for their worship," Bishop George told UCA News on Dec. 22.

"The majority community will administer the church and its property, but it is their duty to ensure the minority shall not be deprived of their right to practice their faith."

They said that even if the majority takes control of a church, the minority should be allowed to worship on special occasions.

Both sides should compromise in cases of "historically and emotionally sensitive" churches that are a common heritage to both the factions, the leaders said.

The government's efforts will aim for "a peaceful compromise," the statement said.

Vijayan had met the warring factions' leaders to reconcile them but both sides refused to change their positions.

In their meeting with Vijayan, the Jacobite faction favored a referendum, claiming most believers are with them. However, the Orthodox faction disagreed and insisted on implementing the Supreme Court order.