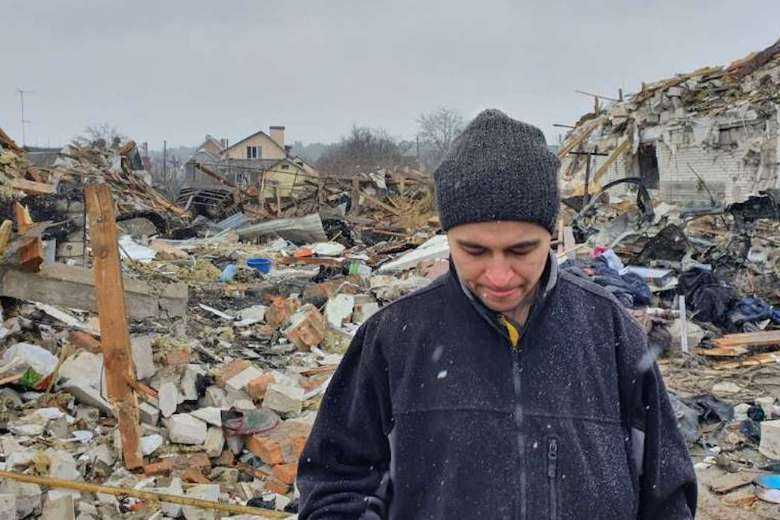 Oleg Rubak, 32, a Ukrainian engineer who lost his wife Katia, 29, in Russian shelling, stands amid the rubble of his house in Zhytomyr on March 2 after it was destroyed by Russian artillery the day before. (Photo: AFP)

Prime Minister Hun Sen has announced Cambodia would accept Ukrainian refugees while warning Khmers not to join international brigades and fight in the Russo-Ukrainian War, adding that the widening conflict was not for volunteers.

“In the case of Ukrainians fleeing to Cambodia, we will accept them," he said during the inauguration of an SOS Children’s Village — villages designed for children without parental care — in the eastern province of Prey Veng.

More than three million Ukrainian refugees have arrived in neighboring countries, with more than a million fleeing to Poland, 270,000 to Hungary and 337,000 to Moldova, since Russia invaded Ukraine on Feb. 24, according to the United Nations.

UN High Commissioner for Refugees Filippo Grandi has described the emergency in Ukraine as the fastest-growing refugee crisis in Europe since World War II.

Cambodia has often faced strong criticism from abroad over its handling of human rights and has been used as a transit point for people smugglers. But Phnom Penh was also widely praised for its previously announced plan to accept refugees from Afghanistan.

Cambodia reached agreement in principle with non-governmental organizations, following the United States' withdrawal from Afghanistan and the fall of Kabul to the Taliban last August, that would enable 300 Afghan asylum seekers to transit through Cambodia. At least 15 Afghan refugees were granted asylum in November.

“I would like to reiterate that Cambodia is willing to accept Ukrainians refugees, but I do not allow Cambodian citizens to serve as volunteer soldiers to fight in the Russia-Ukraine war”

However, bringing them here was hampered by international travel bans imposed to curb the spread of Covid-19 and attempts by the Taliban to stem the refugee flow by limiting flights out of Kabul and banning people from leaving, outraging Western governments and human rights groups.

Hun Sen also said Russia and Ukraine should seek a solution through negotiations, noting that he did not support the war.

“Volunteering to fight in the Russia-Ukraine war is like pouring gasoline on fire,” said Hun Sen, adding that he would not allow Cambodians to die on Ukraine territory.

“I would like to reiterate that Cambodia is willing to accept Ukrainians refugees, but I do not allow Cambodian citizens to serve as volunteer soldiers to fight in the Russia-Ukraine war,” he said.

The Khmer Times quoted General Department of Immigration spokesman General Keo Vannthan as saying “we are prepared to receive refugees from Ukraine. If they come, we will accept them.”

Meanwhile, government spokesman Phay Siphan noted that Cambodia had received many refugees in the past through Australia and asylum seekers from Afghanistan, adding there were two kinds of refugees, those fleeing wars and those who leave due to economic circumstances.

In 2014, Cambodia agreed to accept refugees on a voluntary basis from Nauru and Papua New Guinea who had initially sought asylum in Australia but were refused entry because they attempted to land by boat. Just seven came to Cambodia.