Bishop Tesfaselassie Medhin of Adigrat has called for an immediate end to aerial bombardment in Tigray, the Ethiopian region where a deadly conflict has unfolded since last November.

In a recorded video statement, the bishop said the bombardment was destroying lives, property, civilians and institutions, in a government war of ethnic cleansing in the region.

"The people of Tigray are condemned to be cleansed by desolation, bullets and famine," said Bishop Medhin, who for many months had been cut off from the rest of the nation's bishops.

He said the Catholic Church has constantly called for a peaceful end to the war, which began in November 2020, but added the government has stepped up its action, fueling the destruction.

The Catholic Church -- like all Tigrayans -- has not been spared in the war, Bishop Medhin explained. He said local and foreign armies were exerting physical, psychological and physical attacks on laity, priests and religious sisters.

He condemned the continued detention of the head of the Salesians in the Ethiopian capital, Addis Ababa, as well as other Tigrayans.

Churches, rectories, schools and health centers have been bombed and looted. The bishop said the church's 14 vehicles have been taken away, and solar installations and lab equipment have been stolen.

Bishop Medhin said he regretted that a recent report by the Ethiopian Human Rights Commission and the U.N. Commission on Human Rights was incomplete, did not represent the reality on the ground and did not reveal justice and the truth about widespread atrocities. He asked that "all the atrocities be investigated afresh by an independent international body."

The bishop asked the Ethiopian Catholic Church to break its silence with a voice for justice against the atrocities and act as mother and shepherd of all peoples. 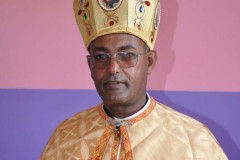 GEZAHEGN DEGEFU
First of all you should make your news balanced.Then as a religion who preach and work for peace to the world you should have to condemn the atrocities committed by #terrorist tplf. The terrorist destroyed AND looted churches and mosques in Amhara and Afar regions of Ethiopia. Sellective sympathy is not virtue of CHRISTIANITY and Others have GOD given rights to be heard. If you are serving HEAVENLY GOD look to others and feel their pain. Thank you so much
Reply

JOHN SMITH
This bishop is fanning the flames of hatred I think. He is repeating the propaganda of the tplf (which is an ethnicist, fascist rebel formation trying to violently overthrow the elected Government of the country). Their propaganda has claimed that the Ethiopian Government is committing genocide against Ethiopians of Tigrean origin. This is entirely false, as the UN commission found recently.
Reply