India has denied any death due to manual scavenging in the last five years, but Bezwada Wilson, who is leading a nationwide movement to abolish the dehumanizing practice, has condemned the “irresponsible findings.”

He said that at least 472 manual scavengers had died during this period and demanded an apology from the federal government.

“No such deaths have been reported due to manual scavenging,” Ramdas Athawale, the federal social justice and empowerment minister, had said in a written response to a question on manual scavenging and deaths raised in the Indian parliament on July 28.

“We did not expect such an irresponsible and cruel statement from the federal minister. It is an insult to the families of manual scavengers who lost their near and dear ones,” Wilson, a Dalit Christian and winner of the Ramon Magsaysay award, told UCA News.

The federal government does not identify deaths due to manual scavenging as such and instead calls them deaths due to hazardous cleaning of septic tanks and sewers.

Wilson, who founded the Safai Karmachari Andolan (manual scavengers’ movement) in 1994, said: “The government is busy with the corporate and elite people; it has no time to listen to the cry of the poor people.”

Manual scavenging exists in most parts of India, especially in northern states, but the government is not interested in helping the poor and downtrodden, Wilson said. It does not even count them as citizens of the country and not acknowledging the casualties is disheartening, he added.

India has a law that bans the age-old, inhuman practice but its implementation is poor. Despite stringent provisions in the law, municipal officials and private contractors employ mostly Dalits to carry out hazardous operations that cause many accidental deaths.

The number of casualties has increased over the past few years. The year 2019 recorded 110 deaths, which was a 61 percent increase from 68 deaths in 2018. A national survey identified 48,345 persons engaged as manual scavengers across 18 states in Januay 2020. 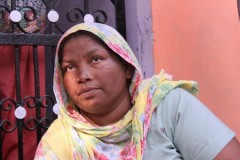 The northern state of Uttar Pradesh was the worst offender with 29,923 manual scavengers.

Father Nicholas Barla, secretary of the Indian Catholic bishops’ Commission for Tribal Affairs, said he was not surprised by the response from the government.

“It is an open fact that people involved in manual scavenging die every year and the government keeps making false promises to help them,” he told UCA News.