The Changing Face of Asian Mission

Exploring some mission areas in Asia, where Western missionaries once worked, to see how the local people have come of age to pastor their own people.

UCA News recently presented the series Slaves of Asia showing the persistence of slavery across the continent. Reporters in various countries gave in-depth coverage to a major injustice involving and challenging societies here. It was the sort of journalism that no other Catholic news agency can provide, and other news outlets used the series to enlighten their own audiences. Now, UCA News reporters and editors are preparing a continent-wide exploration of an important trend in the Church, The Changing Face of Asian Mission. The 10-part series will appear starting Wednesday, November 17.

A common cartoon image of a missionary shows a Western man in a pot being stewed by savages in grass skirts.

A more sensitive and grateful homage to Westerners in mission is provided by the Sri Lankan artist Nalini Jayasuriya (1927-2014) in her painting The Gift of the Gospel in the collection of the Overseas Ministries Study Center in the USA. The painting shows a blonde-haired woman sharing the Good News with appreciative Asians.

Both images have become obsolete. The days when mission meant Westerners sharing the Gospel with non-Westerners have ended.

Vatican 2 affirmed that mission is the vocation of the entire Church, of every single Christian. Sharing the Good News of God’s love is too important to rely upon just a part of the People of God.

When Western missionaries first came to Asia, they focused their attention upon building up local Churches. In some places they even set up Christian villages to foster a sense of community.

Now what was once a flood of Western missionaries to Asia has dwindled to a trickle, and Churches that once provided pastors for Asian Catholics now look to Asia to alleviate their own clergy shortages. Asian clergy, religious, and laity have taken over pastoral responsibilities that once depended on Western personnel, theology, structures, architecture, and money.They have taken responsibility for the schools, medical facilities, and other services the Church has offered.

And now, Asia’s Catholics are becoming missionary, not just carrying on the work they inherited, but expanding it. They are moving beyond the pastoral,which is directed toward the inner life of the community, to mission,evangelical outreach to share the Gospel with all through word, action, and worship.

They cross ethnic, cultural and political borders, led in many ways by millions of Catholic Filipinas working around the world.Others become modern versions of the “professional” missionaries who came to Asia. Tokyo’s Archbishop Isao Kikuchi, for example, has served in Ghana as a missionary.

Whether in their homelands or in “fields afar,” Asia’s Catholics are taking up their vocation to “proclaim the Gospel to all people.”

The Changing Face of Asian Mission will introduce some of these men and women, their work, their motivation, their faith, and their hopes.

As you read The Changing Face of Asian Mission pray that you might know and live your own role in this ongoing story of the Church. 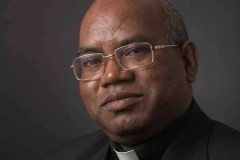 Pakistani priests on a fearless mission in Balochistan Filipino Jesuits keep up mission on island of living dead On a mission to overcome adversities in Kalimantan
Contact Us: [email protected]
© Copyright 2022, Union of Catholic Asian News Limited. All rights reserved. Except for any fair dealing permitted under the Hong Kong Copyright Ordinance, no part of this publication may be reproduced by any means without prior permission.