A candidate to join the Sisters of St. Joseph of Peace attends the ceremony from her London bedroom 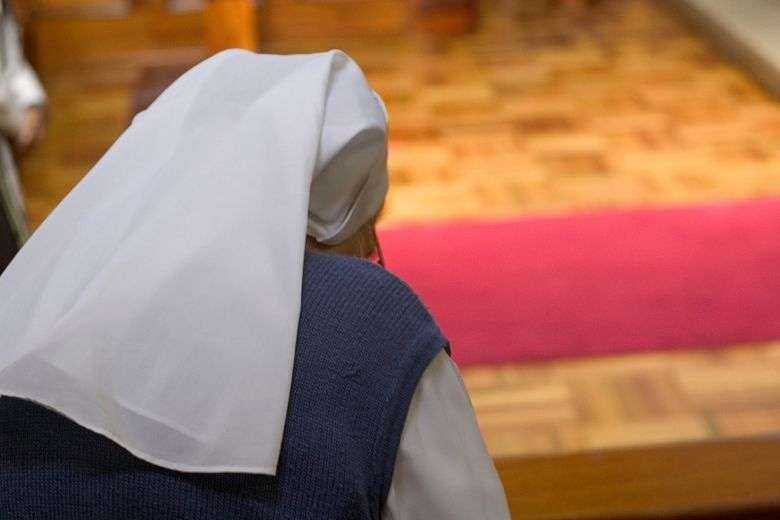 When Liz Dodd was formally welcomed as a candidate for the Sisters of St. Joseph of Peace last November, she took part in the ceremony from her bedroom in London, with her housemates alongside her, while family members, friends and dozens of sisters from around the world joined by Zoom.

"Normally this ritual would be in person -- but are we not blessed that despite Covid-19 and the large distances between us" so many can "take part in this step Liz is taking," said Sister Coralie Muzzy, the congregation's formation director at the start of the Nov. 5 ceremony, speaking from her congregation's office in Bellevue, Washington.

After a sister said a prayer of blessing for Dodd that the sisters, many with white hair, joined by raising their hands toward their computer screens, they individually unmuted themselves and warmly welcomed their new candidate.

Most of the sisters said they couldn't wait to meet her in person, others said they felt they already knew her, and many said she was already a blessing and grace for them. A few dabbed their eyes during each other's remarks.

Dodd, a 34-year-old writer and editor at The Tablet, an international Catholic news weekly based in London, formally stated her wish to discern joining the order, or to be an inquirer, on March 22 of last year, the day before England went into lockdown because of the pandemic.

Since that day, her interaction with the sisters, except for one weekend visit last summer, has been all online with weekly and biweekly Zoom gatherings for discussion or prayer and one for formation, which her housemates call "nun school."

She hopes to enter the novitiate at the end of the summer where she will move in with a community for a two-year period.

During her online welcoming ceremony, she said that even though her experience is so different from sisters who joined the congregation decades ago, there is "an amazing thread" that ties them together. She said what attracted her to this congregation is "how risk-taking and bold and spirit-filled you all are," which she said came through when she saw them all online.

The ceremony tied everything together for Dodd, because until that point the process had been very private and personal and suddenly it was public and joined by sisters and associates from all over the world.

"I'm a convert, and neither my family nor my housemates are Catholic, so their first real encounter with this whole process was that Zoom ceremony," she added.

After it was over, she and her housemates celebrated "in true COVID style" with take-out food. They also had champagne and watched the movie "Sister Act," which she had never seen.

Dodd felt called to a vocation to the religious life soon after an 18-month bike trip around the world. She said her unique discernment process made her wonder if she was "among the first candidates in church history" to do her postulancy like this.

"It works because you're creating an intentional space -- albeit online -- in response to God's call, and God absolutely honors that, whether it's virtual or in person," she said in an email to Catholic News Service.

She also said that millennials and those even younger "get a degree of security and comfort from being behind a screen -- it's our natural environment," which makes the initial stages in the vocation discernment process less daunting . As she put it: "You have more of a sense of control and security because you're having these wild conversations at your desk and in your home."

The format also works because traveling to visit congregations and orders someone is interested in "could feel impossibly overwhelming, but an email and a Zoom call doesn't. Plus, you can fit it all in with work and regular pandemic social life."

But that's not to say that online is always better. Dodd said it took in-person meetings to really confirm what she was discerning, so she thinks a hybrid model works best.

Her experience this past year is not unique. Since the pandemic started, women's religious orders have adapted how they do formation, welcome new candidates and also reach out to potential vocations.

Veronica Kowalski, a 26-year-old from Mississauga, Ontario, has officially been in the discernment process with the Felician sisters for more than a year. Last November, she quarantined and then stayed with the sisters in their convent in Mississauga for two weeks.

Since then, her conversations with the order's vocation director, other sisters, and other women like her who are discerning a vocation, have all been on Zoom.

She said she has spoken with older Felicians who have said they can't imagine going through the discernment process this way pointing out that they didn't even have computers when they joined.

Kowalski, who was laid off from her job in March due to the pandemic, said the frequent Zoom calls have built friendships by "bringing us all together in one space."

"This is the start of building a community," she said in a March 15 Skype interview.

For now, she has been eagerly awaiting word of her acceptance into the candidacy program, which she got in the mail March 16. The fact that she knows some of the sisters and the other women considering a vocation but hasn't met them in person yet is hard.

Above all, the pandemic has confirmed her need to trust in God, something she said she has "done for a while." And even when she worried that the discernment process could take a long time or be really hard, the Zoom discussions reminded her it was possible.

"Here I am -- one year into inquiry and making plans to become a candidate -- so it worked," she said.

Those at the end of their discernment process have also faced pandemic-related challenges but of a different kind.

Sister Josephine Garrett, who professed her final vows as a Sister of the Holy Family of Nazareth last November, said that just three weeks before her final vows ceremony, she had to find another venue for it because the college campus where the ceremony was going to take place suddenly closed due to the pandemic.

Sister Garrett, who grew up Baptist and became a Catholic in 2005, is a school and community counselor and also works with her congregation's vocation ministry. After graduating from the University of Dallas, she worked in the banking industry before switching gears and pursuing a vocation in 2011.

Looking back to her final vows ceremony, where the guest list was limited, everyone was masked and there couldn't be a reception afterward, Sister Garrett has no complaints. "God gave me the graces," she said.

"In the midst of all this craziness," she added: "God was the same God; that's my memory."