High rate of youth unemployment contributes to social instability and even militancy, says a Caritas official 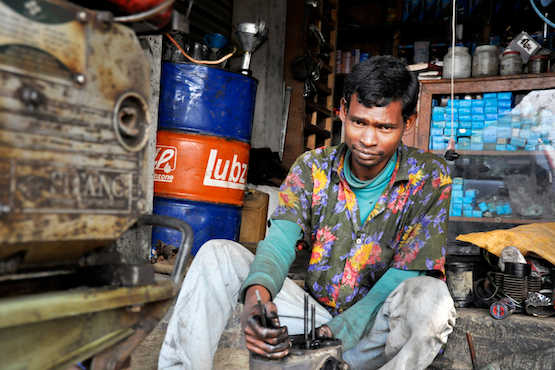 Some 2.6 million of Bangladesh's potential 62.1 million work force were unemployed in 2015-16, according to a joint report by the state-run Bangladesh Bureau of Statistics and the World Bank.

The country's first labor force survey to be state sponsored found, although 1.4 million new jobs have been created since 2015, a significantly large proportion of the unemployed during that period were young people.

An estimated 1 million, or 25 percent of the 15-29 age group, were neither in education nor involved in any sort of economic activities, reported the survey released May 28.

The survey revealed that the unemployment rate is higher among those educated to secondary or tertiary-level education at 6.2 percent, and lowest among people with no schooling, 2.2 percent.

"It's because our education system has no national planning to ensure youth employment at the end of the education cycle," Peris said.

Peris told ucanews.com that part of the problem is young people are not equipped with the skills to become entrepreneurs if they can't find jobs because the system places too much "emphasis on theory" and not enough on "preparation for a vocational trade."

"When young people can't find jobs after education they feel frustrated and are easily misled," said Peris adding that it can likewise fuel social instability and criminal activity.

Filling some of that need, Holy Cross missionary Brother Donald Baker has run a technical school in Dhaka for high-school dropouts since 1983. This inspired Caritas to introduce a similar technical education project in 1992, offering low-cost training to students for six months to two years.

Since then, a total of 55,627 youths, mostly poor and unemployed, who dropped out of school early, have completed training at one of the 10 permanent and 20 mobile Caritas technical schools across the country.

Another Caritas project, the MAWTS Institute of Technology, has provided vocational education to 50,000 students so far.

"In developed countries, about 50 percent of people get technical education, but in our country it is 7-9 percent. Prioritizing vocational education can help reduce unemployment and save society from various problems," Peris said.

Professor Shah Ehsan from the Sociology Department of Dhaka University said, "Unemployment may contribute to weakening the family bond and increase the risk of crimes, including militancy."

"When youths don't attain their expected job, they become detached," he said. Sometimes, out of frustration, they mix with the wrong crowd and "make money from [illegal] drug business."

"Recently, we have seen educated youths increasingly getting involved in militancy, and unemployment is one of the major contributors. If we can't contain youth unemployment, even worse is waiting to happen," he added.